After an uneventful if mysteriously "strange sermon at the U.P. Church, on the greatness of man" on Sunday, the Douglasses met again with Eleanor Lewis and set off for the Museo Nazionale, now called the Museo Archeologico Nazionale or National Archaeological Museum. Then, as now, this is the museum to visit while in Naples, akin to the Uffizi in Florence; and the Baedeker of 1880 that the Douglasses carried with them referred to it as "The Museum" and gave a room-by-room description along with a map. Today, as then, Sundays are free. (Be aware of this that most museums in Italy are free on Sundays.) 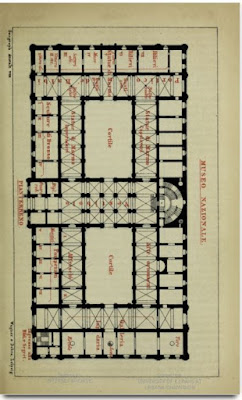 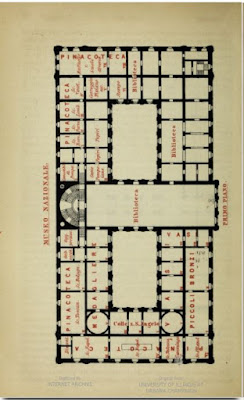 While the museum has many exhibits, the main draw is and was the thing that Douglass mentioned: "A birds eye view of pictures, statuary and many objects of interest, taken from the ruins of Pompei and Herculanium."

The birds-eye view was actually a model, made in the 1850s, of the archeological digs as they stood at that time. The meticulous care with which the model-makers reproduced the mosaics and, more importantly, the frescoes on the walls, have served as some of the only records of those images because years -- centuries, now -- of exposure have caused them to deteriorate. Burial preserved the site, excavation restarted the processes of age. 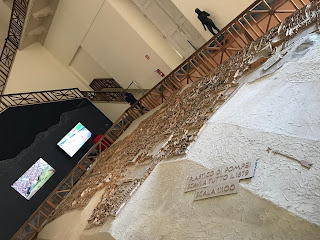 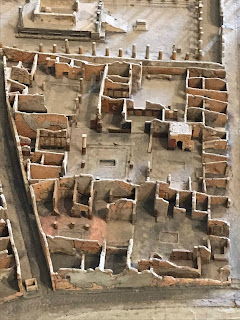 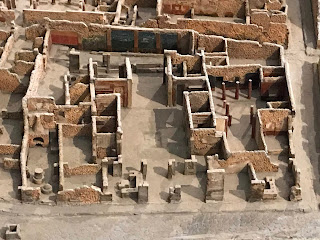 Because of those processes, most of the artifacts and art were removed from the sites of the two cities and into this museum. (There's a longer history to that, but you can refer to Mary Beard's engaging work for more on the subject.)  "The perfection of some of these in form and color and utility was remarkable considering their antiquity," Douglass commented in his diary. "In some respects they transcended modern art."

He was not wrong. I'm not sure what pieces he may have seen, but here are some samples.


There was one room that Douglass probably did not visit, and they did have it in those days because the Baedeker mentions it. You see, the Romans were earthy people, not as uptight about sexuality or nudity as later generations, and certainly not as constricted as those in the nineteenth century. The were, after all, people who considered enormous male genitalia to be good luck symbols.  The founders of the museum in the eighteenth century already began to realize that certain people, especially ladies, did not have the sensibility for some of the artifacts. So, they took the most obvious ones and put them in a "Secret Room" or "Reserved Cabinet," "Raccolta Pornografica" in Italian, according to Baedeker, "to which men only are admitted." The Baedeker describes it as containing "mural and other paintings not adapted for public exhibition, and numerous bronzes, some of them of considerable artistic merit." (That sounds very much like the descriptions of Playboy that praise it for the articles.) They let women in these days and, let me tell you, the Romans were all about the dick. It was quite tedious.

Today, the room lies beyond the mosaics, near the one depicting Alexander and Darius. In the 1880s, according to the Baedeker, this room lay next to one in which gold and silver object, including jewelry, and cameos were on display. That is, things that ladies would have liked to have seen.

Douglass was there with ladies and he himself was no libertine, especially given his reaction to meeting Victoria Woodhull a couple of months later when they returned to Rome. He and they probably averted their eyes from this Racolta.

As for the rest of  the collections, he concluded, "The musium is something to be seen not once but many times in order to comprehend its many attractions[.]" Certainly going to it before and after seeing the two sites would make the visit deeper and richer than a Sunday afternoon.