This e-mail in this morning:


Call for Papers
BrANCH Conference at Madingley Hall, Cambridge,  14-16 October 2011
The 18th BrANCH annual conference will take place from 14-16 October 2011 at Madingley Hall, Cambridge.
The BrANCH committee will meet in the Spring to put the programme into preliminary shape.  Please let me have paper proposals—with synopsis (on a single page) and the briefest C.V.—by Friday 15th April at the latest.
Individual papers and panel proposals are welcome on any aspect of the period 1789-1917.  Postgraduate contributions will be warmly received, and we hope to be able to offer generous subsidies to British-based graduate students.
Please note that all program participants will be required to register as BrANCH members.  Membership fees for 2011 will remain unchanged from 2010 and full subscription information will be circulated shortly.
Send all proposals to me by e-mail at m.s.crawford@ams.keele.ac.uk
I greatly look forward to hearing from you.
Martin Crawford
Chair, BrANCH

I went to BrANCH for the first time last year and had the loveliest time. I very much hope to go this year. I'm thinking Julia Griffiths Crofts might want some attention at this one. She was, after all, British herself, and I could use some advice on local archives -- if such exist in England -- for more on her life there. Do you know how much I would love to find an image of her?

Besides, who doesn't love to hear about a good "Jezebel" about whom William Lloyd Garrison wrote:


For several years past, he [Douglass] has had one of the worst advisers in his printing-office, whose influence over him has not only caused much unhappiness in his own household, but perniciously biased his own judgement; who, active, facile, mischievous, has never had any sympathy with the American Anti-Slavery Society, but would doubtless rejoice to see it become extinct; and whose sectarianism is manifestly paramount to any regard for the integrity of the anti-slavery movement. (Liberator, 18 Nov 1853)

Oh, Garrison, you could be a catty fellow when you tried! Parker Pillsbury called her "devilish," Mary Estlin said that she "would weary out the most determined of believers," Eliza Wigham said that she was "a thorn in the flesh of many of the true A.S. friends here [in Scotland]," and Maria Weston Chapman, always good for a scathing comment described her as having "fastened on the cause as the Leech does the Swimmer." In short, they hated her. Perhaps that is too strong. They hated slavery, they saw her as a threat to their cause, or at least to their organization and networks eminating out of Boston. Throw in the whiff of a sex scandal, and you have an exciting story charged with unexamined racism rubbing up agains unexamined sexism, mixed in with financial wheelings and dealings, and intra-movement betrayals.

Now, how to explain that in a more scholarly tone?
Posted by Leigh Fought at 9:32 PM 1 comment:

For those who could not make the talk in Syracuse, I'll be giving an encore presentation at Montgomery College, Takoma Park, Maryland, on Tuesday, March 1st, at 1 pm in The Commons building, room 211. 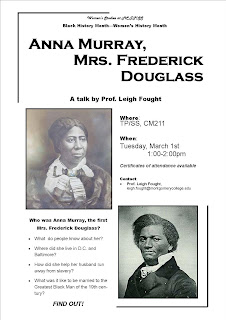 In this talk, I do more than speculate on bandannas, hounds and spoons. Instead, I'm exploring ways to conceptualize Anna Douglass's world and her marriage to Frederick. He does not come off very well in this paper. There are reasons for that, and reasons for those reasons; but this is Anna's turn to be center stage -- whether she likes it or not -- and there are key points on which ﻿he behaves less than admirably from her point of view.
Posted by Leigh Fought at 7:10 PM 1 comment: 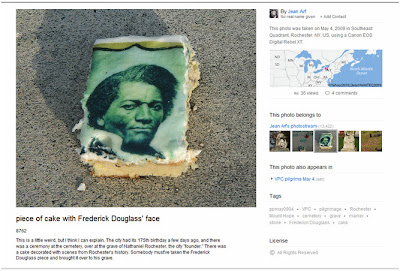 ﻿The caption says it all. The image links to the photographer's Flickr page.
Douglass estimated -- or guesstimated -- his birthday to be in February. There is no documentation for this, and he, in fact, also guesstimated his birth year to have been 1817 when documentation has shown he was born in 1818. Of course, this was one of his point in his autobiographies. He did not know when he was born, nor did any other slaves, because the system of slavery was designed to keep slaves ignorant of everything, including the circumstances of their own births. Like many other features of his life, the date of his birth became part of Douglass's self-invention. He claimed a name, an education, a career, the right to formulate his own ideas, his freedom, and his own date of birth. As he portrayed himself, he symbolically gave birth to himself.

"As he portrayed himself": What really happened? Well, that's where things get interesting!
Posted by Leigh Fought at 9:31 AM No comments:

Email ThisBlogThis!Share to TwitterShare to FacebookShare to Pinterest
Labels: Frederick Douglass, On this day

Rockin' the House at LeMoyne College at 7 pm Tonight!

For those who might happen to be passing through Syracuse, New York, this evening:

I will be giving a talk at Le Moyne College, Syracuse, New York, at 7:00 pm in the college's Grewen Auditorium.

The talk will be "Anna Murray, Mrs. Frederick Douglass," in which I will outline Anna Murray Douglass's life, address the way historians have portrayed her, and discuss the limited evidence that we have in reconstructing her life. Then -- may my powers be up to the task at this point -- I will bring it all home and explain how this relationship is important in understanding Frederick Douglass and the lives of free black women such as Anna.

Aside from presenting what will be an awesome paper to an undergraduate audience, I am hammering out what will become essentially 1 1/2 - 2 chapters in the book.
Posted by Leigh Fought at 6:17 AM 1 comment:

In "Recollections of My Mother," Rosetta Douglass Sprague described her parents early days of marriage in New Bedford:

The little that they possessed was the outcome of the industrial and economical habits that were characteristic of my mother. She had brought with her sufficient goods and chattels to fit up comfortably two rooms in her New Bedford home – a feather bed with pillows, bed linen, dishes, knives, forks and spoons, besides a well filled trunk of wearing apparel for herself.

In 1872, just after the Douglass house in Rochester burned, Ottilia Assing wrote to her sister Ludmilla (in the same letter, as you will see, in which she clued me in to the possibility that Anna wore a wig):

Eleven thousand dollars in U.S. bonds burnt, probably because this stupid old hag totally lost her head, as it usually happens with uneducated people, for she had plenty of time to save them, and as they were deposited in a light tin box in her bedroom, and it had been forcefully drummed into her head what to safe first in case of an accident, no other explanation is possible. She probably thought more of her wig and some dozen silver spoons.

Same spoons?
Posted by Leigh Fought at 10:51 AM No comments:

Another Bit about the Bandanna

In 1872, the Douglass house in Rochester burned down. In the aftermath, Ottilie Assing wrote to her sister Ludmilla excoriating Anna for the loss of an estimated $11,000 bond and securities. Her invective was vicious, classist, and racist; but, in them, she passed on an odd piece of information. After calling Anna a "hag," Assing wrote, "She probably thought more of her wig and some dozen silver spoons."
A wig? Let's take a look at a photograph of Anna (the last was a copy of a photograph, and I'd be interested in seeing the original.) This one, also in the Cedar Hill collections, was taken sometime just before the Civil War: 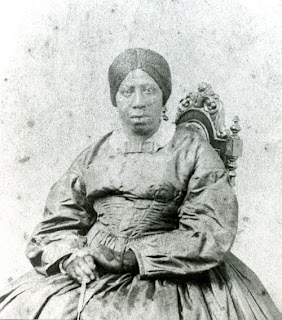 Is that perhaps a wig that she is wearing? Does Cedar Hill have evidence of Anna Douglass having worn a wig? ﻿She was a dark-skinned woman, so having hair that straight would be unusual, wouldn't it? Did black women straighten their hair in the 1850s? Or does a wig explain the texture? If so, then that might also explain the bandanna.
In fact, now that I'm thinking about it. There is a collection at the Nebraska Historical Society that includes clippings of the Douglass family's hair. I distinctly remember Frederick's because it was long like in his portraits, and Rosetta's, because it was so rich. I don't remember Anna's, and the woman who kept the clippings was good friends with Anna.
I need to check on these things. I have no idea what they will mean in the end, but with someone who left behind so little for a historian to work with, I have to take what I can get, where I can get it, and try to understand her life through it.
Posted by Leigh Fought at 12:01 AM 2 comments: