Douglass in the News

Sadly, in the past week, stories about rolling back civil rights gains of the entire history of the United States have appeared in the news. I don't know what Douglass himself would have to say about the climate of today, but such moments should make people living now understand that these fights have a historical context and that things a man said or did almost 200 years ago continue to speak truth to the hostility toward equality and progress today.

Here are two stories that appeared in my Google Alerts for news about Frederick Douglass. The first, written by Stan Simpson and appearing in the Hartford Courant, tells of Douglass's awakening to the connection between literacy, critical thinking, and freedom of both the body and the mind. I confess that, over twenty years ago when I first read Douglass's Narrative (or remember reading it), that moment in his story made me love it. In this day,"they" or "the business community" or whoever drives education reform demean the liberal arts by demanding a "skilled workforce." Yet, Douglass's describes precisely the ways that reading and exposure to new ideas through words and books develop creativity and the skill of thinking necessary to survival in this complex world.

The second story is by Leigh Fought -- ME!  In this story, which appeared in the Syracuse Standard, I make connections to interracial relationships, which were so reviled through most of U.S. history (and, I might add from personal experience, are still reviled today), Frederick Douglass's activism and second marriage, and gay rights. Please note, I am not saying that Douglass would support gay marriage if he were alive today. I don't want to speak for him over a century after his death. I was just using his life to illuminate and illustrate an issue today.

Also illustrated, the poor reading comprehension skills and ugly bigotry of the majority of commenters. That, I suppose, demonstrates a slight flaw in Douglass's connection of literacy to ideas. The reader has to understand what he reads before he can be enlightened by the words. That, or not exploit the newspaper's platform to hammer their own issue.
Posted by Leigh Fought at 8:58 AM No comments:

Email ThisBlogThis!Share to TwitterShare to FacebookShare to Pinterest
Labels: Douglass in the news, Interracial, Reading

Last week, during the preparations for the Frederick Douglass in Ireland event at St. John Fisher College, (which was -- as the Irish say -- grand!) organizer Tim Madigan interviewed one of the speakers, Ann Coughlan, for the college television station. Coughlan is a PhD candidate in literature at University College-Cork, and her dissertation is on Douglass's visit to Ireland. Her paper at the event was a lovely dissection of Douglass's language as he described poverty in Ireland. As she says, he was a marvelous writer, and that sometimes gets lost in all of the discussion over the contents of his writing and the actions of his life. He could put together a moving, beautiful sentence, and structure a story with the best of them.

Here, Coughlan discusses her own work and interests more generally.

cardinaltv on livestream.com. Broadcast Live Free
Posted by Leigh Fought at 10:16 AM No comments:

Louisville Ky Sept 26th 1883
My Dear Brother
I again write you a few lines to let you know that I am still on the enquire -- for you as it has been a number of years since we have met still i have never forgotten that you are my Brother. -- I have written to you several times but received no reply.
as I have some very important business to attend to & if I can only get a line from you then I can go through I am a S.M.T. & it is something of importance you will be ever so kind to me by answering this I am a member of Deborah Temple No 28 -- my W.P. lives on Tenth st hear by where you stoped when you was here some time ago at Mrs Harris' she died not long ago --
I will write you a good long letter if you will only drop me a few lines then i will tell you the particulars & all about the Business that I wish to attend to for it will be by & through you that I can succeed in my undertaking

Alls Well All is Well & send much love to you
Your affect Sister
Sarah O. Pettit

direct your letter to me in this way
Mrs. Sarah Pettit
Louisville Ky
No 415 -- First street
Bet Green & Jefferson


--- Sarah O. Pettit to Frederick Douglass, Louisville, Kentucky, 26 Sept 1883,
General Correspondence, Frederick Douglass Papers, Library of Congress.
(p. 1, 2, 3)
Both Dickson Preston, author of Young Frederick Douglass, ﻿and William McFeely, author of Frederick Douglass, suspected that Sarah O. Pettit was Douglass's sister. After all, Douglass had an older sister named Sarah, born in 1814. In 1832, while Douglass was still Frederick Bailey and studying The Columbian Orator in stolen moments in Baltimore, Sarah and her infant, Henry, along with her aunt Betty and Betty's small children, Angeline, Lavinia and Isaac, were all cuffed into a slave coffle and sold south to Mississippi.
Preston assumed that a woman named Sarah, identifying herself as "sister" and noting the long time since their last meeting, would be that same Sarah lost a half a century earlier. McFeely, who characterized this letter as "bleak," (317), speculated that "Douglass may have concluded that Sarah Pettit was not his sister." (317) He implied that Douglass wanted to escape his slave past and concluded that, sister or not, "nothing in the record suggests that it [the letter] resulted in any sort of reconstruction of her family, or of Douglass's." (317) I confess that, as an editor on the Frederick Douglass Papers project, I went along with these assumptions, which led me to pull up this letter while working on the reconstruction of Douglass's childhood.
Already, with my experience with Ruth Cox Adams, also known as Harriet Bailey or Harriet Adams, and with my passing familiarity with African American vernacular, I approached the use of the affectionate terms "sister" and "brother" with a more discerning eye. "Sisters" and "Brothers" are often related by kinship other than blood.
Both Preston and McFeely interpret this as the first and probably only correspondence between Douglass and Pettit. To me, that seemed off. Compare the tone and content of this letter with the one that he received from his brother Perry Downs.  Downs carefully established the veracity of his claim by mentioning their grandparents, their childhood home, the name of their master, and a particular incident that occured on the last time that they saw one another. None of that appears in Pettit's letter, which could mean that they had met more recently than the late 1820s and early 1830s.
The references to a Temple and the abbreviations, however, caught my eye. This seemed almost masonic. If not masonic, then some similar organization. That's where Google can be a good research tool, at least at first. A search for "SMT" of course turned up nothing of use. "'Deborah Temple' Louisville Kentucky," however, turned up History of the United Brothers of Friendship and Sisters of the Mysterious Ten (archive.org has a better version), with a Deborah Temple in Louisville, Kentucky.

So, SMT stands for Sisters of the Mysterious Ten. "Sister" and "Brother" meant that they were fellow members, or supporter in his case, of this organization (as well as in the battle against racism). Her business probably had some connection to that. I haven't been able to find her in the census just yet, although I have found a white woman named Sarah A. Petitt in 1850 and 1860. White people may have belonged to this organization, or she may have been light-skinned enough to pass to a census-taker, but Sarah A is probably not the same person as Sarah O; and Sarah O. Pettit was not the daughter of Harriet Bailey and sister of Frederick Bailey. That Sarah was gone.
Posted by Leigh Fought at 2:00 AM 4 comments: 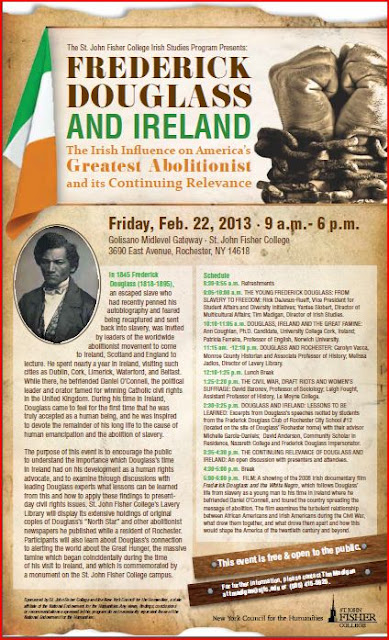 Next Friday, St. John Fisher's College in Rochester, New York, will be holding a day-long conference "Frederick Douglass and Ireland." The conference is open to the public and yours truly will be on between 1:25 and 2:20 pm. The schedule suggests that I will be talking about Douglass and women's suffrage; but, after talking with organizer Timothy Madigan, we concluded that something connecting Rochester, women, and Ireland (or at least the British Isles) might be more intriguing and pertinent. So, expect something on Julia Griffiths and a tiny bit on Isabel Jennings.

Here is the schedule: 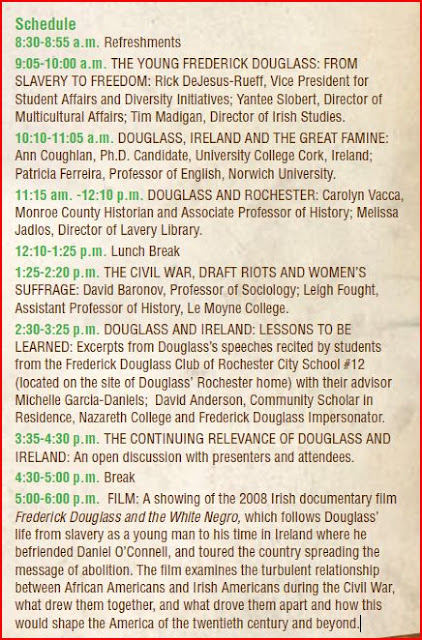 "Exploring the Lives of Anna Douglass through History and Poetry"

Last fall I participated in the program "Exploring the Lives of Anna Douglass through History and Poetry" at Villanova University along with poet Nzadi Kieta. I presented my paper "Anna Murray: Mrs. Frederick Douglass," and Nzadi read from her cycle of poems in Anna's voice. This is the video of that lovely evening. I go first, giving Anna's story the historical bones, then Nzadi fleshes out and animates her life.

Many thanks to the Gender and Women's Studies and Africana Studies department who made this happen.
Posted by Leigh Fought at 9:02 AM No comments: