A "Douglass" in the Jefferson "Family"

It's been a while because it's been a short, busy summer. The book is still moving forward, now with access to more secondary sources. I will be giving a talk on Anna Douglass at Villanova University on September 29, 2012, (that's a Wednesday) at 4 pm, sharing the program with Prof. M. Nzadi Keita, who has written poetry about Anna. Then,  in October, off to Northumbria University for the BrANCH conference where I will give a paper on the Douglass marriage on a panel with the fabulous Angela Murphy, who will be talking about the marriage of Jermain Loguen. More on both as details develop.

Meanwhile, for your amusement, I found this at the Smithsonian Museum of American History in their exhibit on Jefferson's slaves. This is a tree for the enslaved family of Joseph Fossett and Edith Hern, who lived on the Monticello hilltop. Originally, I took this picture because I liked the way that it represented the generations -- much better than the standard tree shape.: 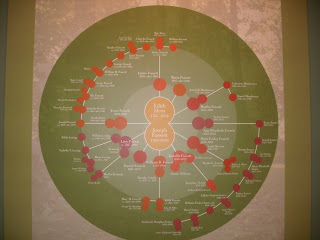 Then, I noticed the grandson there at the bottom of the circle. His name?:﻿ 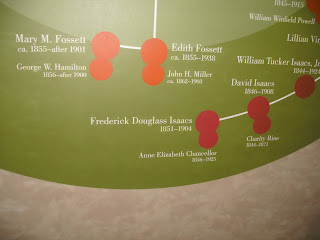 As I always joke with my students, all things lead to Frederick Douglass.
Posted by Leigh Fought at 6:16 AM 2 comments: