...in the Walter O. Evans' Frederick Douglass Collection, Savannah, Georgia. (Days 1-3 to follow, along with other explanations of this trip. What can I say? I've been busy in the evenings!)


The following notice became mislaid, but still hope it may be of interest to the friends of Mr. Hewlett. As announced in this column three weeks since, Mr. P. Molyneaux Hewlett made his debut, Monday evening, June 4th, as Othello, in the Union Hall, Boston, supported by excellent talent. A fair audience was in attendance, and was profuse with its applause. The role of Othello to the most experienced tragedians is one requiring their best endeavors, and is rarely played without room for criticism, and it would be a matter of surprise if a debutant should make an unqualified success at once. Mr. Hewlett’s text, gestures and movements were excellent, and in many parts the portrayal of agony exhibited a good control of his facial muscles, which is a great feature in this piece. With all kindness we would suggest a little closer attention to distinctness of tone, parts of passages being lost to the audience. The impersonation argues well for his future success, and we recommend an essay of the part in this city in the fall with the same excellent support. -- “Old Cambridge.” Old Cambridge Chronicle, 23 June 1877

A very enjoyable performance was given in Union Hall, Boylston street, last evening, the tragedy of ‘Othello’ being presented by an amateur association, assisted by several professional ladies and gentlemen. The title role was assumed by Mr. P. Molyneaux Hewlette, a colored tragedian, whose impersonation of the Moor was very favorably received by the audience. The support was, as a whole, very good, and the performance a decidedly entertaining one. -- “Othello,” Boston Herald, 5 June 1877

Mr. P. Molyneaux Hewlette, a colored gentleman, performed Othello on Monday evening, June 4th, at Union Hall, Boston. Mr. Thomas Downing [our Tom] son of Geo. T. Downing, Esq., of Newport, R.I., writes us that the performance was a decided success. The entire cast, except Mr. Hewlette consisted of white actors of recognized ability. The House was crowded, and Mr. H. was pronounced by the best critics of the ‘Athens of America’ an actor of decided ability.... Mr. Hewlette, we presume, is a son of Aaron Molyneaux Hewlette, professor and teacher of gymnastics, whom we knew well, years ago. The son, doubtless, inherits the qualities of his father, who was not only eminent in his profession, but a learned, refined gentleman; and entertaining conversationalist, of varied accomplishments and fond of music and the drama. Our knowledge of the father leads us to anticipate and desire the success of the son.-- “Colored Artists.” The Elevator, California, 7 July 1877

Yes, Paul Molyneaux Hewlett was the son of Aaron Molyneaux Hewlett, who ran the gymnasium and affiliated departments at Harvard University from 1859-1871. Paul Molyneax eventually dropped the Hewlett part of his name and became an actor in Europe. He was probably (I need to confirm this) the second black actor to portray Othello on the American stage. The first was Ira Aldridge, who also found that the prejudice of American audiences not only limited his roles but made even roles of black characters such as Othello impossible. In the 1880s, he was a member of the Fisk Jubilee Singers. He seems to be a bit of an early Paul Robeson, doesn’t he?

"What does this have to do with Frederick Douglass and women?” you may ask – I mean, aside from my belief that Frederick Douglass sounded like Paul Robeson (or James Earl Jones). Well, Paul Molineaux had a sister and Aaron Molineaux a daughter named Virginia. Virginia? She married Frederick Douglass, Jr. just after the Civil War. They had seven or eight children together. Douglass, the senior, loved Shakespeare and quoted Shakespeare about as much as he quoted the Bible. I wonder if he ever saw Paul Molineaux, his son’s brother-in-law, play Othello on stage?

“Wait a minute!” you may be saying. “Seven or eight children? How does that happen?” I submit this:

According to the family tree on Library of Congress Frederick Douglass Papers webpage, Frederick, jr., and Virginia had seven children: Frederick Aaron, Jean Hewlett, Lewis Henry, Maud Ardelle, Charles Paul, Gertrude, and Robert Small. No Virginia Anna. Perhaps she died in infancy? A quick look in Ancestry.com turns up nothing.

Poor Virginia Douglass herself died in 1890 after a long illness. Influenza had hit the Sprague family just before her death, but she had been sick before then. I don’t currently have any information that might indicate what this illness was. Puerperal fever? Cancer? Some deadly virus? Her husband wrote to Helen Douglass, his father’s second wife, “Virginia was my all.” Their son Charley, the third youngest, “tried” his father with what could have been his own coping mechanism for a dying mother, his “habit of running away."

Not too long after – not an uncommon nor shameful act -- Frederick, jr., married Laura Antoinette Haley. They had a son, Haley George Douglass, in 1891 (November, if I am not mistaken). Haley went to Harvard University and was eligible for the draft in World War I. He and his wife, Evelyn, seem to have had at least one son, Joseph J., who was born around 1920. (Obviously, the Douglass family began to have access to birth control in the generation of Douglass’s grandchildren.) Census records are not available after 1930, but he seems to have died in 1865. Lewis Douglass, who compiled much of the collection in which I am researching and who had no children of his own, left these papers to Haley. He had them as late as 1950, which I know because I found a document signed by him and dated 1950 in the scrapbook that contained these items.

That’s where the trail ends. For now. Perhaps his grandchildren or great-grandchildren, who would be my own age, are still in the D.C. area? Or, perhaps, the fact that this collection was for sale means that this family line ended sometime in the past 70 years.
Posted by Leigh Fought at 8:21 PM No comments:

Seems It Actually Was a Wig

I found an original print (but not the negative) of Anna Douglass's portrait: 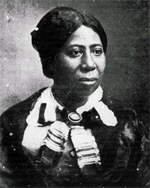 The Frederick Douglass Collection at the Moorland-Spingarn Center of Howard University has a lovely series of photographs, including the carte de visite of this image. Looking closely at Anna's hairline in the image (which is much easier when the object is actually in your hand), you can see that the part of her hair rests just a fraction above her scalp and does not meet her forehead. Is her hair braided underneath, or cut close? Was she balding? In the actual photo, you can see that the material of her dress is overlaid with lace, and she seems to have a watch chain fixed near her lapel. So, how did this hairstyle fit into her presentation of herself?
Also, the image is not as early as I expected. She appears so young in this picture that I had assumed that it was taken in the 1840s. Of course, I was also assuming it was a daguerreotype. The carte de visite in the collection at Howard was dated 1874. ﻿
The collection also contains and amazing photo album filled with pictures of Douglass children, grandchildren and great-grandchildren, and I must have spent the entire afternoon absorbed in the images. One photo showed a very young Rosetta Douglass at maybe 10 years old, with two little ponytails. Another showed a very angry and equally terrified girl of about 1 who, as the images in the album advanced, grew into a lithe young woman and mother of a baby in a later photo. They were one of Rosetta's daughters and grandchild.
The archivists have identified another photo as Nathan Sprague, Rosetta's husband. I have not encountered any other photos of him with the possible exception of a photograph of the Douglass home on A Street in Washington, D.C., which shows two men standing in the yard, one presumably Douglass and the other supposedly Sprague. The features of both are unclear.
I first thought the portrait was of Jermain Loguen (who had a daughter, Amelia, who married Lewis Douglass, Frederick's son), who had a similarly square jaw, but the type of print and the age of the sitter suggested a younger man. Then, I saw the portraits of Rosetta's daughters. They look nothing like her and everything like this man. Also, when I got home and pulled up a picture of Loguen, I realized that they look very little alike except for a strong jawline.
Another portrait included four of Rosetta's daughters and one of her granddaughters with what appeared to be an interracial couple identified only as Mr. and Mrs. Bruce. He was too young to have been Blanche K. Bruce. The picture looks like it was taken in the parlor at Cedar Hill.
Several unidentified women appeared in the album. I wondered if one of the portraits of a white lady in a hoop skirt was Julia Griffiths.
In any case, I shall turn to their collections for several of the images for the book.
Posted by Leigh Fought at 4:06 PM 2 comments: 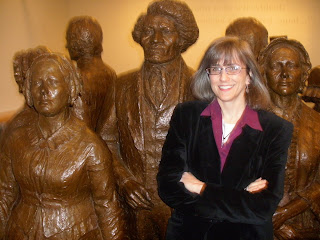 (I mean, minus the questionable focus.)
Posted by Leigh Fought at 12:25 PM 1 comment: