Ibram X. Kendi interviewed me about Women in the World of Frederick Douglass  for his blog series featuring new books in African American history and African Diaspora Studies at Black Perspective. Here is the link: http://www.aaihs.org/the-womans-rights-man-a-new-book-on-women-in-frederick-douglasss-world/ 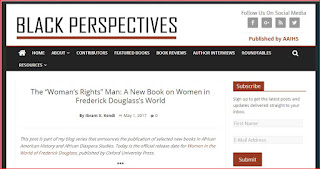 Oxford University Press has shared an excerpt from my introduction here: https://blog.oup.com/2017/05/role-women-life-frederick-douglass/ 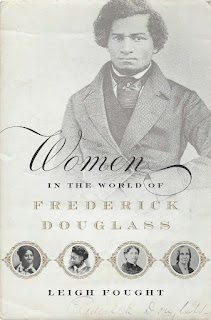 Posted by Leigh Fought at 9:00 AM No comments:

"Man is by Nature a migratory animal"

From "My Foreign Travels," Douglass's December 15, 1887 speech to a crowd at the AME Metropolitan Church about his European tour.:

Man is by Nature a migratory animal. It does not appear that he was intended to swell forever in any one locality. He is a born traveler.

Assuming that he originated in one quarter of the globe only, which is the orthodox view of creation, I believe his present diffusion over the broad earth, shows that he must have early developed this migratory tendency: And when we consider the present passion for travel, the thousands who strain every nerve and muscle to raise the means to go abroad, the loss of time and money sustained, the comforts abandoned at home, and the discomforts borne patiently with abroad, the bad air breathed on ships, the dust, smoke and cinders swallowed on railways, the dangers to life and limb encountered -- we must admit that this migratory tendency, if original, has lost nothing of its intensity in the transmission.


The tendency to travel had taken Douglass's generation, with the expenses declining and the availability of Baedeker's travel guides removing some of the uncertainty. Cultural enlightenment and polish was within reach of parts of the middle class.

Some of us still yearn to move, to see, to partake of that western culture, of the waves of those who have gone before us as actors and tourists. So we shall! Not breathing bad air on ships, but crammed within airplanes (and in one of the middle seats in the middle sections). Not with dust, smoke and cinders, but other pollutants in new cities, different from those in our own cities. What danger to life and limb? I'd rather not contemplate, but the migratory intensity has been transmitted, if only temporarily.  I shall try to find some of the places that pulled him to Rome, Florence, and Venice.

Douglass pondered that Adam "might perhaps have remained at home, contented and happy with Mr.s Adam in the Garden of Eden until now. But they both seemed to have had a very strong desire for knowledge, and something of a roaming disposition." He traveled with his own Mrs. Adam, the second Mrs. Douglass, Helen. I too shall be traveling with my Mr. Adam, who shall remain nameless, as he wishes. I only mention him to point out that this is not a Douglass-centered visit but a vacation on which I hope to visit the same sites as Douglass. I shall have another person's itinerary to consider, as well. As much as he is willing to oblige my obsession, he is only human. Fortunately, like Douglass's Mrs. Adam, we two -- or we four -- have the same desire for knowledge of the same things.

Until we return!
Posted by Leigh Fought at 6:21 PM No comments:

For some reason, seeing Women in the World of Frederick Douglass in the bookstore made me feel like a real, legitimate author. That's silly, magical thinking, as if all of the writing and researching weren't real and legitimate. As if the last book's researching and writing and appearing in a bookstore wasn't real and legitimate. As if the previous book's research and writing weren't, either. All of that was spectacular! Yet, somehow, seeing it in a commercial bookstore seemed like a crowing achievement. My 11 and 12 and 13 year old selves who fantasized about having a book published and sold in B. Dalton or Walden Books -- the chains in those days -- exploded from deep inside of me and we all whooped and shouted and danced around Barnes and Noble when we saw this book looking back at us from the shelf. One of the saleswomen came over and said, "I just have to know, what is it?" 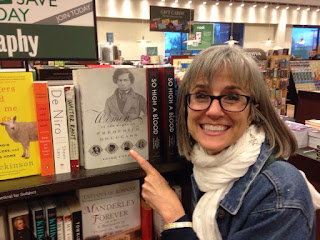 And a friend sent me a picture from another store, too.: 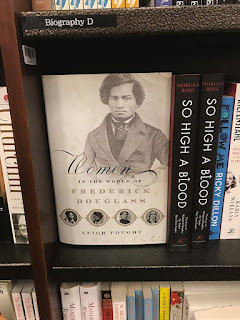 And yet another friend sent me a picture from a store in D.C.: 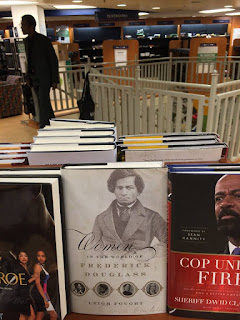 Fergus Bordewich, award-winning author of multiple books such as The First Congress, America's Great Debate, and Bound for Canaan has written a very kind review of Women in the World of Frederick Douglass for this weekend's Wall Street Journal.

Sadly, it is behind a subscriber's firewall, but here is an excerpt:


Born into slavery in Maryland, Douglass (1818-95) escaped to freedom with help from the Underground Railroad and eventually rose to become the most famous African-American of his time: a spellbinding orator, a newspaper editor and eventually a political figure in his own right. He was also, it turns out, one of the age's most passionate male feminists, as Leigh Fought shows in "Women in the World of Frederick Douglass," a fresh and surprising account of Douglass's life.

Douglass saw the emancipation of slaves and the empowerment of women as two fronts in the same war for fundamental human justice. His support for feminist goals was more than political pragmatism, argues Ms. Fought, a professor of history at Le Moyne College in Syracuse, N.Y. Throughout his life, Douglass's relationships with women were complex, varied and often remarkably intense, not to say shocking to many in the mid-19th century.

LA Times Festival of Books: Women Behind the Power

A bit behind here, what with grading and catching upon being behind and so forth. Here is the C-Span video of the LA Times Festival of Books: Women Behind the Power from two weeks ago. It was such a lovely experience, with a fantastic audience and a panel of amazing writers. Blanche Wiesen Cook generously helped me to save myself when I blanked on an answer to a question and then figured out what to say. Also, what can you say about an event in which people flocked to tents to buy books and hear authors speak except that there is hope for the world!

My view of the proceedings.: 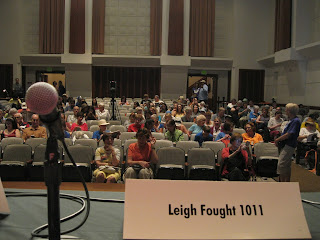 Posted by Leigh Fought at 11:43 AM No comments: