Two new books are out on Frederick Douglass, each taking a look at different aspects of his life. 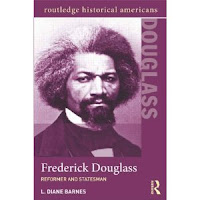 First up, L. Diane Barnes's Frederick Douglass: Reformer and Statesman (click on title to order), part of the Routledge Historical Americans series. From the website:


Frederick Douglass was born a slave in Talbot County, Maryland, in February, 1818. From these humble beginnings, Douglass went on to become a world-famous orator, newspaper editor, and champion of the rights of women and African Americans. He was the most prominent African American activist of the 19th century. He remains important in American history because he moved beyond relief at his own personal freedom to dedicating his life to the progress of his race and his country.

This volume offers a short biographical exploration of Douglass' life in the broader context of the 19th century world, and pulls together some of his most important writings on slavery, civil rights, and political issues. Bolstered by the series website, which provides instructors with more images and documents, as well as targeted links to further research, Frederick Douglass: Reformer and Statesman gives the student of American history a fully-rounded glimpse into the world inhabited by this great figure.

I worked with Diane on the Frederick Douglass Papers correspondence series, and she is both a fabulous researcher and writer.

The second book is Frederick Douglass in Washington, D.C.: The Lion of Anacostia, by John Muller (click on title to pre-order) and published by The History Press. From the website:


The remarkable journey of Frederick Douglass from fugitive slave to famed orator and author is well recorded. Yet little has been written about Douglass’s final years in Washington, D.C. Journalist John Muller explores how Douglass spent the last eighteen years of his life professionally and personally in his home, Cedar Hill, in Anacostia. The ever-active Douglass was involved in local politics, from aiding in the early formation of Howard University to editing a groundbreaking newspaper to serving as marshal of the District. During this time, his wife of forty-four years, Anna Murray, passed away, and eighteen months later, he married Helen Pitts, a white woman. Unapologetic for his controversial marriage, Douglass continued his unabashed advocacy for the rights of African Americans and women and his belief in American exceptionalism. Through meticulous research, Muller has created a fresh and intimate portrait of Frederick Douglass of Anacostia.

John is a journalist in D.C. and has combed through previously untapped sources to reconstruct Douglass's life in the nation's capitol, both at home and in the halls of power, in ways that no other biographer has done.

In bypassing a traditional, born-lived-died, biography of Douglass in order to focus on a particular aspect of his life, both Muller and Barnes will enrich understanding of the Big Man's life, providing detail and nuance that can shift perceptions of Douglass with seismic force.
Posted by Leigh Fought at 8:34 AM 1 comment:

"You will perceive that I am now in Edinburgh. It is the capital of Scotland -- and is justly regarded as one of the most beatuful [sic] cities in Urope [sic]. I never saw one with which for beauty elegance and grandeur to compare it. I have not time even had I the ability to describe it. You must come and see it if you visit this country. You will be delighted with it I am sure. The monument to Sir Walter Scott -- on pinces street , is just one conglomeration of architectural beauties. 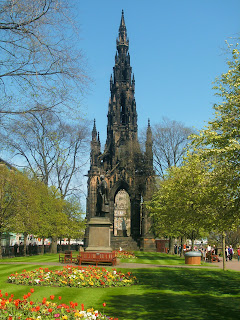 The Calton Hill -- Salsbury Craggs and Arthur Seat give the city advantages over any City I have ever visited in this or your country. 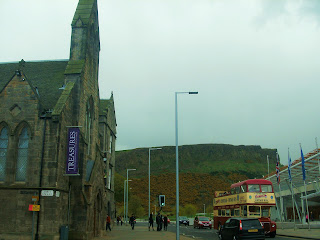 I enjoy every thing here which may be enjoyed by those of a paler hue -- no distinction here."

I confess that I have wanted to see the Scott monument since I read this letter over a decade ago. I also confess that the main reason that I wanted to see it had nothing to do with Douglass or with Scott or with the architectural wonders of Edinburgh.

No, the main attraction of this monument was this: 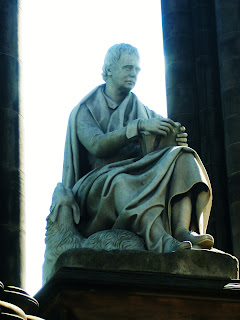 Not Scott, but the furry companion next to him.: 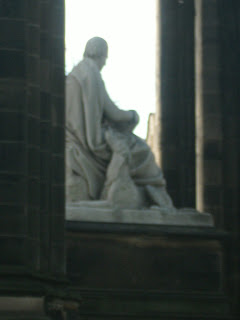 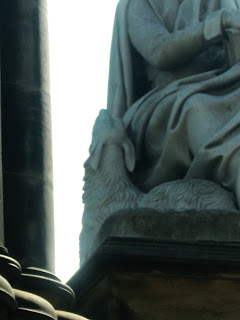 Although he said nothing about the inclusion of the faithful companion, Douglass probably had a fondness for the monument that went beyond his own appreciation for Scott's poetry. After all, remember Nellie Grant?﻿
﻿
Posted by Leigh Fought at 7:42 AM No comments: