My goodness, time flies. These days, as the semester approaches, and the college administration sends e-mail that update e-mails to which half of the recipients have hit reply-all to ask the same question asked in half of the previous reply-all (replies-all?), and everything having to go online or hybrid with the reasonable expectation of going online, and -- oh, just thinking it is exhausting. So, with all of that, Sally Hemings has had to fight for attention.

My last post dealt with Beverly Hemings flying a balloon, an image that continues with me as one of peace and hope for some reason. Indeed, that night, when I returned to finish reading Thomas Jefferson Dreams of Sally Hemings, Stephen O'Connor used that very same incident as one of the final scenes. He almost matched my own imagination, possibly because we both constructed it from Annette Gordon-Reed's research in The Hemingses of Monticello.

Because all roads lead to Frederick Douglass here, the news in Douglassness this week reported that the Rochester city airport will soon carry his name. The petition had been going around earlier this summer, and I confess to having added my name. Still, I seldom expect much to happen as a result of anything these days, such is my Gen X fatalism, cynicism, and pessimism. What a joy to be wrong!

That's the upside of being fatalistic, cynical, and pessimistic. You are seldom disappointed, and occasionally surprised.

Douglass did not live long enough for air flight, but his curiosity about new inventions like the camera and the phonograph, as well as his poetic sensibilities, makes me think that flight might have attracted him enough to try it at least once.

Many years ago, I had a pilot friend who would take pretty much anyone willing on flights as he earned hours for his liscence. We flew over to Easton's airfield -- I think it was Easton -- had lunch in the diner at the airport, and flew back.

The flight plan was hilarious because we had to chart a route that skirted around St. Michaels. You see, different areas, especially around D.C., have cones of airspace restrictions above them for a variety of reasons. St. Michaels had a short cone, but high enough to force Cessnas flying into the nearest airfield to plot a roundabout course in order to avoid it. Why? Because Donald Rumsfeld owned property in the area. Edward Covey's old property, if I remember correctly. Make of that what you will.

That's not the point of the story here.

On our return journey, I had my face pressed against the window looking down thinking vague thoughts about Douglass having lived down there and wondering who all owns the properties now, and wishing I had thought to bring a map, when the landscape suddenly seemed familiar. I realized that we flew right over Wye House, the plantation where Douglass lived as a little boy and that he described in his autobiographies.

I'd like to think that would make travel easier for him if he was alive today, but he was a big man and would not fit very comfortably in seats these days. What do you think would be his opinion of  Zoom?

Posted by Leigh Fought at 4:35 PM No comments:

Too much has interfered with my musings here. I started chapter 1 in earnest. I had a birthday, which I always believe should be celebrated over a week, at least. Then  there was, for lack of better term, just plain bullshit. If you are alive you know what I'm talking about because you probably have your own brand that interferes with doing anything worth doing, generally kills your joy, and then leaves you with a whole mess of catching up to do.
Chapter One is doing fine, in spite of the bullshit. My birthday brought an interesting present from my husband, the Eminent Historian, in the form of the novel Thomas Jefferson Dreams of Sally Hemings, by Stephen O'Connor, that deserves its own posts. The rest is still in clean-up mode. As that continues, here is a short, sweet image.
In Thomas Jefferson and Sally Hemings: An American Controversy, Annette Gordon-Reed points out a passage about Beverly Hemings in Isaac Granger Jefferson's memoir. Beverly was the oldest child of Sally Hemings and Thomas Jefferson to survive to adulthood. Isaac Jefferson had been an enslaved artisan at Monticello, a tin and blacksmith, and one of the many children of Ursula and Great George Granger, who were one of the other extended and respected families there. His recollections were recorded in at his home in Petersburg, Virginia, in 1842 (right about the time that Frederick Douglass first began speaking as an abolitionist in New England, if we keep All Road Lead to Frederick Douglass going).

Isaac Jefferson told the interviewer about the Hemingses at the beginning of Chapter 2, and mentioned that "Sally had a son named Madison, who learned to be a great fiddler. He has been in Petersburg twice: was here when the balloon went up -- the balloon that Beverly sent off."
That is such an interesting detail, and Gordon-Reed investigated it (which is one of the reasons that I love that book so much). She noted that Beverly had departed Monticello in 1821 and, according to Madison, passed over the color line. Madison himself was free by the terms of Jefferson's will in 1826, but his mother died in 1835, so he took his family to Ohio in 1836.  With that window, she went searching for any evidence of a balloon ascension in Petersburg. She found it in the July 1, 1834, issue of the Petersburg Constellation.
I wanted to see it for myself -- not because I disbelieved, but because I just wanted to see, in the same way nerdy way that you want to see historic sites or the Declaration of Independence at the National Archives. None of the databases to which I have access have the Constellation.* One, however, did have a Salem, Massachusetts, that mentioned the notice. For what reason, I have no idea, and that may be a story for someone to investigate, too.  Whatever the reason, here it is:

"The Petersburg Constellation gives notice that a balloon man is about to visit that place, and the editor says he augurs a hearty welcome to him. The editor may put up his instrument, for these itinerant skylarkers are bore enough of themselves."
Well, someone's grouchy pants were on a little tight in the editorial office that day!
Gordon-Reed found that the balloon ascended from Poplar Lawn, a park with a large field bordered by Jefferson Avenue. Is that not poetic? Although this particular notice may not have definitely been the one that Isaac Jefferson mentioned, Isaac Jefferson had connected Beverley Hemings to an interest in balloons, one that Gordon-Reed pointed out paralleled his father's interest in Paris half-a-century earlier.
Sally Hemings was in Paris, too. Madison's memoirs suggest that she told them of her time there. How could she not?  Well, I'm sure there are reasons, but imagine her putting her children to bed and telling them stories. What better stories than of a city across an ocean? Of a contraption full of air that lifted a man in a basket into the sky? What a feeling of freedom to be lifted above the earth and to see the world from the perspective of a bird.
That puts me in mind of Douglass, who at the moment that Beverly's balloon may have been ascending, stood on the shores of the Chesapeake watching the sails of ships pass by, wondering why he, too, could not sail as free as them.
Beverly as the oldest, did not have other siblings' experience before him from which he could follow. He had only his mother's trust in his father to reassure him that his freedom would come. I can see an image of flight appealing to someone in that position.
Then, he just disappeared from the record. What became of him and his ballooning? Maybe someone will fall down that rabbit hole of research and find out. 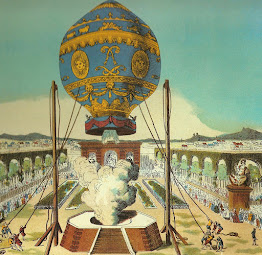 *Little known fact: we who toil away as "lesser" schools such as non-elite liberal arts colleges, directional universities, urban universities, two-year colleges, and so forth, work with obstacles that people at major universities do not when we research our books because our libraries are not as flush with funding nor deemed as central to our missions as at flagship state, elite private, and ivy or ivy-adjacent places. When we put out books or articles, we've done so with more teaching and more effort in obtaining the tools we need.

Posted by Leigh Fought at 2:34 PM No comments: