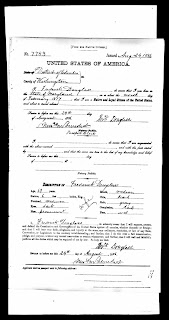 The man stood six feet tall, or so Newton Benedict, the passport clerk, estimated. Hair gray. Dark skin. Bearded, oval face. Forehead of medium height. Nose prominent. Eyes dark, too. If he was born in February1817 and this year was 1886 now August -- Benedict worked a quick calculation on the bottom corner of the application -- then the applicant was sixty-nine years old. Would the gentleman be travelling alone? "Wife" Benedict dashed down, in the middle of the page, amid the descriptive features. No affidavit nor witness testimony of the applicant's citizenship would be needed. Anyone who had lived in the nation's capital at any time in the past decade knew that the man who signed the form "Fred'k Douglass" was a legal American.

That had not been the case twenty-six years earlier.

Citizens of the United States passed across the ever changing global borders with very little documentation during the nineteenth century. Indeed, that held true until 1941. Therefore, in spite of being a fugitive slave in the eyes of the law on his first trip to England in 1845 and a person of interest in a federal case on his second in 1860, Douglass made the passage fairly easily in terms of State Department bureaucracy.

That is, until he decided to visit France during that second trip. As he recounted in his memoir, Life and Times of Frederick Douglass, "The attempt upon the life of Napoleon III about that time, and the suspicion that the conspiracy against him had been hatched in England, made the French government very strict in the enforcement of its passport system." Sarah Parker Remond and Caroline Putnam, sisters to Douglass's first African American lecturing partner, Charles Lenox Remond, had also made an application for a visa a few months earlier. They were turned down.

Although the details of both cases differed, ultimately the Dred Scot decision had rendered them non-citizens unentitled to passports. He did not go to France, although he did receive permission to visit from the French minister in London. Remond and Putnam did go, but only after publically embarrassing Benjamin Moran, the assistant secretary who had denied them their visas.

Still, in 1886, Douglass did not need a passport. As in 1860, he may have wanted to "leave nothing to chance." Nevertheless, this is a public document, issued by the Department of State and held by the National Archives, that implies that Frederick Douglass, specifically, is a citizen of the United States.

Helen Douglass, "wife," on the other hand, like all other married women, had a legal identity covered by her husband's.

Posted by Leigh Fought at 3:10 PM No comments: