I started the day off by posting this on Facebook:


Off to the Archives of American Art. What I hope to find: salacious details of Ottilia Assing's forbidden love for Frederick Douglass. What I will probably find: leads on 19th century artists' addresses, the status of her dogs, and various travelogues, but not a dang thing pertinent to Douglass. All in German. Still, it is Ottilia, and she is usually a chatty correspondent.

The Archives of American Art is very easy to find, just a block down 9th Street from the National Portrait Gallery and Gallery Place/Chinatown Metro stop. The archivists -- all painfully young -- are friendly and helpful. The young woman working the manuscripts reading room had even processed the Sylvester Rosa Koehler Papers in which the Ottilia Assing letters were located. Plus, the whole design of the space looked like a modern art gallery. Very cool. 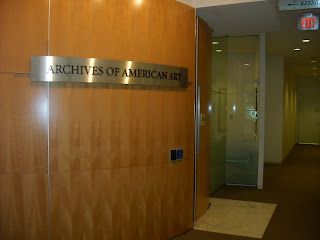 The box was big, not one of those grey Hollinger boxes, but a cube-ish file box with lots of folders. The Assing folders have several letters each, and each letter is 3-5 pages long and in superb condition. This was going to be awesome. Sure, I expected them all to be in German, and that I would be transcribing German all day to translate later. I have about three words of German -- at least one of which is obscene -- but a general knowledge of the grammar and syntax that, with a dictionary and a translation website, could help me get the gist of the contents. I've done it before with the Karl Varnhagan von Ense finding aid. Plus, from her letters in English, I know Assing's hand writing is quite legible. Here is an example from the Library of Congress:

Not bad, right? Nicely shaped, no smudging, clearly delineated words. You can read it, which is not always the case. Gerrit Smith is a legendary case in point.

Her German handwriting is not quite as good. It's neat, that is certain, but the shapes of her letters made me wonder if I were not perhaps reading Russian. I spent thirty minutes deciphering the words "Hoboken" and "Rochester" -- and I'm still not certain that "Rochester" actually does say "Rochester." The jumble of letters that seems to say “Linber Hnow Rouflar!” may or may not actually say "Liebe Herr Koehler!" I read over another series of linked loops at least ten times before I realized that it said "Douglass." It looks like it says "Largfuff." Don't ask me how I managed to decipher the shape that spelled out "Washington."

In fact, I began to make a list of squiggles that I had deciphered:

Even with legible writing in English, you have to sometimes spend a little time over a word, comparing its loops to similar loops elsewhere in the document, discerning a few letters and playing with their sounds in your head and with the context of the rest of the sentence before the word suddenly appears to you, like one of those hidden pictures so popular in the early 1990s. That, however, requires agility with the language and familiarity with the shapes of the letters. In this case, the shapes of her German letters are not like the shapes of her English letters; and I, with my three years of high school and one semester of college German (which stuck with me longer than my six semesters of college French, but c'est la vie), all taken when leg warmers were still in style, cannot play with the shapes and sounds and make anything appear. Even the simple words that I do know, like "ein" and "ist" and "und," took me at least ten minutes to pick out.

"Ach, scheiss," I said, over and over and over. "I am totally effed." (Except I used another word, and I don't know the German for it.) How on earth am I going to get through this? I can't even transcribe them at this point. A shortcut occurred to me, that I could just use Maria Diedrich's Love Across Color Lines and cite these types of documents "as quoted in." Except I hate when historians do that. It's a graduate school trick, and casts doubt upon your argument because you never know if the person who quoted the passage originally quoted it in proper context. You have to see the quotation in context, and the context might give you so much more information.

That is, if you can actually read the context.

Also, in this case, while I'm not challenging Maria Deidrich's interpretation, I am questioning some of the finer points and I can't even really question in my own head, much less in print, if I can't read the letters she read and on which she based her arguments. 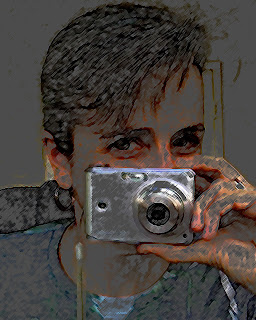 Posted by Leigh Fought at 7:22 PM No comments:

In my research yesterday, I came across this letter, dated 4 May 1934:


My dear Friends:
It was pleasant to receive your telegram expressing appreciation of the University’s action in naming its new classroom building after your distinguished grandfather. We are sorry that the notice reached you too late for your attendance. I am happy to report to you that the dedication was well attended, that many eminent persons were present, including six members of the Douglass family. For your full information, I am sending you, herewith, a copy of the University’s news release of the occasion.
With cordial regards and best wishes, I am
Sincerely yours,
Mordecai W. Johnson

What building had been named after Frederick Douglass, might you ask? This one: 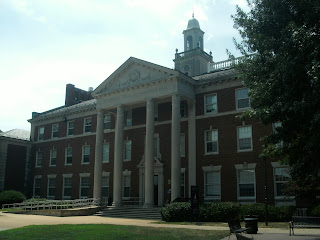 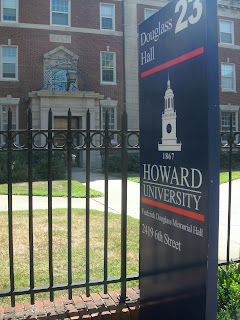 The Frederick Douglass Memorial building on Howard University campus, right across the quadrangle from the library in which I was sitting while reading that letter and in front of which I ate lunch (because the Moorland-Spingarn closes for lunch) all week.

Now, I find that I absolutely must locate (wherein "absolutely must" means "it would be cool, but not really necessary except for fun") "L'ouverture Terrace" in Takoma Park. Rosetta Douglass Sprague, Frederick Douglass's daughter, had a home there in the 1890s. Since I have worked in Takoma Park for the past 4 years, finding her home might be rather interesting. If the same house is standing, then I might be able to ascertain the style of living enjoyed by her family at that point in time. Her husband, after all, was supposed to have been a former slave and had to struggle for survival (and respect) in the aftermath of Emancipation and the rise of Jim Crow. That's a story that I'm still trying to tease out.

The "dear Friends" to whom this letter was addressed, Hattie B. Sprague, Fredericka Douglass Perry, and Rosabelle Sprague Jones, were three of Rosetta and Nathan's five children.
Posted by Leigh Fought at 8:18 AM 2 comments:

Douglass and "Johnny Come Down to Hilo"

In one of the three versions of Fredericka Douglass Sprague Perry's reminiscences about her grandfather, Frederick Douglass, she wrote about one of the games that Douglass played with the grandchildren when they were young. He would lead them into the dining room at Cedar Hill to the music of his violin, then teach them "songs of the rollicking slave urchins he had learned as a slave boy." She transcribed two of them, and one of them seemed surprisingly familiar to me, hearkening back to my days at Mystic Seaport:

This actually sounds very much like an old sea shanty, work song, that has been transcribed this way:

Of course, you have to rearrange Perry's lyrics, remembered approximately fifty years later, to:

This was a work song that that could go on and on as long as the leader, who set the pace, could make up verses or as long as the task took. It has an upbeat rhythm and was good for fast moving jobs. So, the song wasn't so much a "slave urchin" song as it was a maritime working class song. The musicologist at Mystic Seaport said that it can be traced to the south, most specifically the Mississippi River, but such things did not stay in one place very long on the water, and white Marylanders did much nefarious slave trading down that way.

I imagine that Douglass learned this song on the docks and in the shipyards in Baltimore. His de facto master there owned and worked in shipyards; and before Douglass himself learned the caulking trade, he himself lived on and roamed the streets down by the wharves in Fells Point.

Douglass's daughter, Rosetta, mother of Fredericka, however, did not appreciate this song and looked on in "great disgust." For Douglass, this was one of the few things that he brought from slavery, and he actually seemed to have loved all music, regardless of its origins. For Rosetta, however, this song (even if the "shake her" part were omitted) was undignified, with shameful and low-class connections from which she seemed to have wanted to distance herself. For the grandchildren, it was a rollicking song taught to them by their grandfather and they, two generations removed from slavery, saw no degradation in it.

For your enjoyment, and to illustrate the song, here is a video of shantymen Fisherman's Friends singing:

I'd be curious to know if the other song that Perry transcribed sounds familiar to anyone: