UPDATE: Colleen Dube of the Fulbright Commission has let me know that it wasn't just the funding for the conference that was cut (as I initially thought), but their entire budget. She wrote, "State Dept has cut our entire budget by 5% not just the conference which has ramifications for all our awards and activities this year. With the currency exchange in real terms the cut amounts to 10%."  Needless to say, that is pretty drastic and affects employment and opportunities for scholars and staff.
---------------
Some months ago -- probably a year on their end of the planning -- the Fulbright Commission in Ireland and University College Cork planned a small, two day conference on Frederick Douglass. The idea is not as far-fetched as you may think, since Douglass spent a lovely three weeks in Cork during October 1845. For this conference, I was asked to give a paper on Douglass, and planned to present "Dirty, Sexy, Abolition: The Frederick Douglass - Julia Griffiths Scandal," which I had presented at the BrANCH conference at Cambridge last fall.

About two weeks ago, the State Department, under which the Fulbright Commission falls, cut the funding for the conference, much to everyone's chagrin. As an alternative, Colleen Dube, who runs the Fulbright office here in Dublin (which must be an unenviable task), passed on my name to Bernadette Comerford and Myles Dungan, producer and presenter of the History Show on RTE1, the national radio station in Ireland. Bernadette contacted me, I sent her my paper, and -- long story short -- Myles interviewed me about Douglass and Julia Griffiths for a segment of the show that aired this past Sunday, February 25, 2012. They even brought in African American actor Hope Brown to read selections of Douglass's work.

Isn't that cool? The whole experience was quite fun, and Bernadette and Myles were wonderful hosts.

This is the link to a podcast of the radio show. My segment begins at about 19:25, although the graveyard segment before and Percy Shelley segment after are quite fascinating, too.: http://www.rte.ie/radio1/podcast/podcast_thehistoryshow.xml

Me and Myles Dungan in the studio: 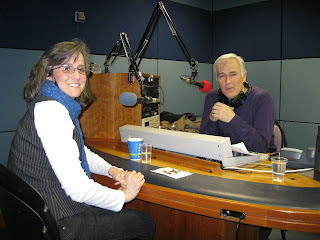 (In the spirit of ladies' antislavery societies in Ireland, I am wearing a scarf that I myself knitted out of Aran wool.)

Douglas Egerton will also appear on the show later in the month to discuss African American service in the Civil War, which he had also planned to present at the conference and which is the subject of his upcoming book on African Americans during Reconstruction.
Posted by Leigh Fought at 1:08 PM No comments:

It's been a long time, hasn't it? Sometimes time on the book takes precedent.  Also, again my apologies to Contingent Cassandra and John for my overly active moderation feature. Maybe I should just turn that puppy off?

Generally, diagnosing your subjects with some sort of disease or condition is not a good practice as either a medical doctor or a historian. This is especially true of psychological conditions like depression or a learning disability or post-traumatic stress disorder. First of all, you don't have the subject sitting in front of you to answer questions about their symptoms, you just have the documentation of either the subject or observers describing the symptoms. They describe the symptoms using the language and understanding of "madness" or disability of their times; and, as I've been pondering in regard to emotion, people today cannot assume people of the past had the same emotional or psychological experiences that we do here in the 21st century.  In an excellent post at the Women's History Network blog, Katie Barclay, who is writing about the history of emotions and their impact upon law, points out that, "there is increasing awareness of the malleability of the physical body." "We have come to understand that the body is not a ‘universal’, identical across time and space," she writes, "but a product of cultures"

Nonetheless, when presented with a set of symptoms and circumstances, the temptation to diagnose can be overwhelming. Right now, I'm writing about Maria Weston Chapman in the aftermath of a riot at Pennsylvania Hall in 1838. Chapman had lived through an earlier riot in Boston in 1835, when a mob attacked a meeting of the Boston Female Antislavery Society, chased William Lloyd Garrison through the streets, and threatened to attack her house.  In the aftermath, her sisters described her as With the mob roiling just outside the door of the Anti-Slavery Office, she supposedly declared, “If this is the last bulwark of freedom, we may as well die here as anywhere.” Such a remark was more likely the stuff of legend, but her sisters all remarked in the aftermath that Chapman noted that remained “very calm & composed but very resolved.” Not twenty-four hours after the attack, she called on her sister, Deborah, “& said that she had never had such a delightful time in her life.” “Maria continues to be in a state of great enjoyment,” Anne Weston wrote a week later. “She receives such glory she can hardly bear it.” A month later, English writer Harriet Martineau, with barely concealed infatuation, described Chapman as “vivified by courage, and so strengthened by upright conviction, as to appear the very embodiment of heroism” as she “threw up her golden hair under her bonnet” and prepared to face yet another disruption at the BFASS’s November meeting.

Three years later, she had a much different response. During a convention of Anti-Slavery Women, a mob surrounded Pennsylvania Hall, where the meeting took place, throwing bricks and stones. Garrison even mentioned the presence of "bowie-knives." Chapman, who seldom spoke in public and never to so large a crowd as the one in Pennsylvania Hall, gave a ten minute introduction to the next speakers while the mob roared outside and pelted the building with their missiles. A few days later, the numbers outside growing and becoming more threatening, the women had to link arms and force their way through the crowd to leave the hall. The mayor, placing his faith in the mob to keep the peace, sanctioned what happened next. The crowd broke into the hall, turned on the gas, and set fire to the building, gutting it within hours. Then, it turned on black Philadelphians, their churches, and a black orphan asylum.

Chapman and her sisters escaped by train; but when the train got to Stonington, Connecticut, Chapman could go no further. In the parlance of the day, she suffered a fit of “brain fever,” which, in Garrison’s words, left her “a raving maniac.” Garrison, of course, was not in Stonington, so he, to made a questionable diagnosis. Still, this is the part of the story that makes playing historical psychologist so tempting: her symptoms resembled more those of someone who had survived a traumatic event, such as a violent crime, disaster, or battle. The smallest of tasks exhausted her. For instance, she told her sister Caroline, “that to plan & execute getting off the bed is now a great intellectual effort.” She could not bear company for very long, and while “she was glad very to see Henry [her husband] but could not have him stay in the room more than a few moments.” Even letters “get her worked up.” She displayed a marked sensitivity to sounds, starting at noises, Caroline reported, as “the faculty of hearing seems wonderfully increased in power.” Furthermore, “Her appetite does not come,” “she does not sleep,” and she “begins to be rather uneasy to get home.” Another lodger at their stopping place told Caroline that she had seen similar conditions; and, while she said Chapman might recover in time, Caroline should be wary of relapse.

Caroline felt a heightened sense of anxiety herself. She was not distressed enough to require the prescriptions of Valerian [herbal Valium], anodyne [a pain killer], “Dovers powder,” “Oil,” [I have no idea about either, but the oil may have been a purgative] and leeching, and shorn hair endured by her sister. Yet, “I bear about with me a sense of unsafeness,” she wrote, “& a weight oppresses my spirits that I am obliged to throw off by an effort.”  Given that both had just survived a form of street warfare, an attack upon themselves and their friends for no other reason than opposing slavery, you can see how easily I could say that they suffered from PTSD.

Yet, as philosopher Edgar Jones pointed out in an article on “Historical Approaches to Post-Combat Disorders,” , “Because of changes to the meaning of words and the ways that emotions were conceptualized, it is difficult to know what clinical phenomena were being described by military physicians any earlier than in the mid-nineteenth century.” Jones also described the symptoms of World War I shellshock as differing in some respects from PTSD, particularly with the experience of fatigue, which makes Chapman's experience closer to those in the aftermath of war in the early 20th century. That seems logical, since she lived in a world more like theirs than like ours.

Still,  I know about as much about PTSD as I do about Chapman's actual experience, so I don't like imposing this diagnosis; and I keep taking it out and putting it back into the manuscript. At the same time, I don't want to just let her experience slide, just passing along the information that she, tragically, had "brain fever." Nor do I want to suggest that the episode indicated any mental weakness on her part. More seems to be going on there. If I were writing a biography of her (and she really should have a more recent one because she was such a powerhouse), I would delve into this further. Right now, I have to figure out the way that her experiences affected her ideology and her style of management in the organizations to which she belonged. I'm trying to explain her view of the world within the abolitionist movement because that is the source of her conflicts with Douglass.  So, the big question her is: how did this "breakdown" this bout of anxiety in the aftermath of a violent experience, affect her perception of abolitionist activism and her behavior toward dissent within the movement -- like that coming from Douglass.

Douglass, by the way, was still in slavery in Baltimore, negotiating a quasi-free arrangment with his de facto master that eventually led to his escape. He, too, had his own traumas.

Chapman seemed to have recovered from this episode by the summer of 1838, and I haven't yet found any  mention of anyone tiptoeing around her because they considered her "fragile." Indeed, if they tiptoed around her, they tiptoed from fear and admiration at her formidability, not because they worried for her mental health.