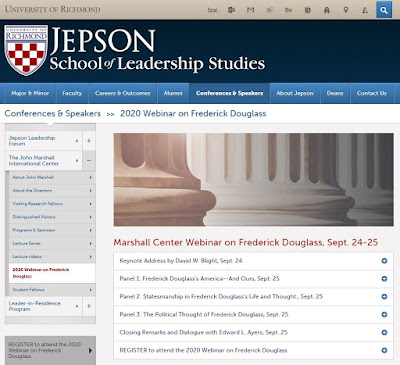 This Thursday and Friday, September 24-25, 2020, the Marshall Center in the Jepson School of Leadership Studies at the University of Richmond will host a Frederick Douglass Webinar. This was originally scheduled as a conference last spring, but the pandemic caused a change of time and venue. That allows more people to attend.

The webinar begins on Friday night at 7pm with the keynote by the fantastic David Blight, who will speak on his book Frederick Douglass: Prophet of Freedom. Questions from the audience can be submitted in the chat section in writing, as tends to be the case with webinars.

After a thirty minute break, Blight returns with Edward Ayers to conclude with closing remarks and dialogue.

Each panel on Friday has three speakers, and questions can be submitted in the chat section in writing. David Blight and I are the historians amid political scientists, and I really still haven't figured out how to speak to political scientists. I always feel a little silly telling my stories while they are up there making big idea arguments, although I know that my stories are neither silly nor little and actually contain big ideas. So much so that fifteen minutes cannot contain them all and another fifty minutes ends up on the cutting-room floor.

I do know, after working on a bibliography for Oxford University Press, that the political scientists are doing some great work integrating Douglass's early abolition with his later political positions. The usual narrative describes him as having become conservative or falling away from his radicalism during his later decades, but they show a consistency of principles and ideology across his work. The really good political scientists work in that area where philosophy and politics overlap, where we lay people usually find the philosophes of the Enlightenment, which moves into the questions and problems of putting ideology into action. I usually think of it as a spectrum of ideology, activism, and operational politics -- that is, from your ideals on one hand and how to get things done on the other.

Anyway, the program is here: https://jepson.richmond.edu/conferences/marshall/douglass-schedule.html

The registration form is here: https://events.r20.constantcontact.com/register/eventReg?oeidk=a07eh9z9lse8a29f176&oseq=&c=&ch=

More on the Marshall Center Lecture Series here, with links to the registration form and webinar on the page, in case the above links don't work: https://jepson.richmond.edu/conferences/marshall/lecture-series.html

Posted by Leigh Fought at 10:27 AM No comments:

This semester started well. The preparation, on the other hand, became an ever-moving nightmare of rearrangement of planning, each part of which required ten steps, each step of which required....well, you get the picture. Rearrangement wasn't just a matter of saying, "ok, we won't do this, we'll do that." Rearrangement was a matter of saying, "ok, we won't do this. We have to tear it all down and rebuild something new that will have to be torn down again when they change the plans yet again." My end result, which differs from other schools, has me in the classroom one out of every four meetings with my students. Each meeting is with only half of the enrolled class at at time, every other week. Since they have 100/200 level classes on one rotation, and 300/400 level classes on another, and I teach two 100 and one 300 level courses, I'm on campus every week.  I can't think about the schedule too hard or I get confused. I just have to roll with it.

This is the current state of educating students.

So, that ate into a lot of Hemings time. Then, the research trips planned with NEH grants kept getting pushed back because of library closures and travel restrictions until, now, maybe, if lucky, might take place over Christmas, Spring Break, and next May. Might. Maybe. If lucky. All of which pushes the deadline for finishing the book back. Fortunately much of the book requires contextual reading or is online. Maybe this pandemic will lead to more funding for digitization projects, if it doesn't lead to the collapse of libraries, archives, and schools entirely.

This is the current state of research.

Last night, however, I had an interesting insight into one adaptation of theater for the immediate future. The Capitol Historical Society broadcast a reading of Jean Parvin Bordewich's play Now's The Time, about the ratification of the 14th Amendment. She focused on conversations among Thaddeus Stevens, William Fessenden, Lydia Smith, and George T. Downing, the latter being an ingenious inclusion since he joined Frederick Douglass in agitating to Andrew Johnson for black male voting rights and ran the restaurant at the capitol, which made his meetings with Stevens and Fessenden natural within the action of the play. Listening, and to some extent watching, the reading of the play seemed somewhat akin to listening to a radio play.

Later this month, the Marshall Center at the Jepson School of Leadership Studies at University of Richmond in Virginia will be doing roughly the same thing with a Frederick Douglass Conference (or "webinar"). David Blight will speak on the evening of September 24, 2020, and others (including myself) throughout the day on September 25, 2020. The conference was originally scheduled last spring, right as the pandemic hit. So, they postponed their plans them moved them online. Normally, I loathe Zoom, but this will be much different from holding a meeting or a class. It might be more like that play.

Alas, during that spring conference, I had hoped to spend the weekend in Richmond to see an exhibit on Sally Hemings at the African American museum there, then drive up to Charlottesville. That seems like years ago!

Meanwhile, down in Maryland, the governor appears to have taken up the movement for Frederick Douglass Freedom Day (I know I have an old post about that on this blog somewhere) by naming September "International Underground Railroad Month." Massachusetts and New York should get on that, too. Then, on the Eastern Shore, a Frederick Douglass Park has opened on Tuckahoe Creek, with wayside markers telling the story of his and of Anna Murray's youth there. This is quite a far cry from when I first visited there back -- oh, goodness, when was it? -- back in the early 2000s when all that I could find was an odd marker and a pamphlet for a self-guided driving tour, so I used Dickson Preston's Young Frederick Douglass and Douglass's own Narrative of the Life to flesh it all out.

That, at least, is a better current state of something.

Posted by Leigh Fought at 10:50 AM No comments: