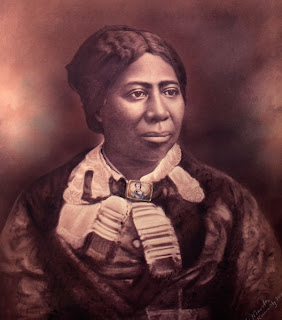 Still trying to make Frederick Douglass Freedom Day a Thing. After all, in Life and Times of Frederick Douglass, at the very beginning of Second Part, Chapter 2, he said, "My free life began on the third of September 1838." (A year before the Amistad saga began, incidentally.)

Last year I wrote about Frederick Bailey donning a sailor suit and hopping a northbound train, ticket and borrowed protection papers in hand.  In his autobiographies, he told of his first few days, uncertain of whom to trust or where to turn, until directed to David Ruggles on Lispard Street. At some point during that time, he wrote to "Anna, my intended wife," who arrived from Baltimore, "to share the burdens of life with me." The Rev. J.W.C. Pennington, himself a former slave, now minister, married them in the presences of witnesses on September 15, "a few days after her arrival."

September 3, the day that Frederick left Baltimore, to September 15, the day that Frederick Bailey and Anna Murray were married. Considering the time for the letter to reach Murray and that she arrived a few days before the wedding, let's say ten days elapsed there between his departure and the news that he had arrived safely. Think back before then. He said that he had decided to take his own fate into his hands three weeks earlier. That makes a month in which Anna's life hung in the balance along with her future husband's. What did she do during this time?

The one source for her side of the story comes from their daughter, Rosetta Douglass Sprague, who wrote a memoir in the early twentieth century, My Mother As I Recall Her. The similarities between this story of her mother and those told by her brothers suggest that this was the family origin story and was, therefore, of great importance to all of the Douglasses. Rosetta's emphasis on her mother's role in the origin, along with the domestic details absent from the brothers' accounts, tells quite a bit about Anna's role in the family from the very beginning.

"The three weeks prior to the escape were very busy and anxious weeks," Sprague related, going on to point out that Anna Murray had saved her earnings and that "The little that they [her mother and father] possessed was the outcome of the industrial and economical habits that were characteristic of my mother." She detailed the "feather bed with pillows, bed linen, dishes, knives, forks and spoons, besides a well filled trunk of wearing apparel for herself," and, as most brides (and their little girl daughters) would remember, "a new plum colored silk dress was her wedding gown."

Had she saved her trousseau in hopes of some unknown but much desired future with a husband and family of her own, long before she had known of this young caulker with so much swagger? Had she begun to accumulate it when she met him probably earlier that year? (Had meeting her been his inspiration for the arrangement of pseudo-freedom that he had with Hugh Auld between May and August?) Had she purchased it in those three weeks when they made their plans to go north? Had she waited until she arrived in the city and then went on a shopping spree? Perhaps not the last, since Sprague does say "brought with her." Did she sew that plum silk dress herself, knowing that it would be her wedding dress?

What was the conversation between them when he told her that he had resolved to leave? "Miss Murray, I am going. Come with me and be my wife." "Miss Murray, we cannot stay here and have a life worth living. We must go north where I -- we -- can be free." "Mr. Bailey, let's go north." "Mr. Bailey, how much longer must you put up with this?" "Mr. Bailey, we shall not have a family where you can be taken away. We shall go north were you -- we -- can be free." "Are you thinking what I'm thinking? Then, let's go."

Think also of what she, too, risked as they planned the journey. She lived in the house of a white family. As satisfied with her work as they may have been, would they have kept her on if they discovered she had helped a slave run away? Those preparations that Sprague mentioned. She must have done them in private, quietly, not arousing suspicion that anything unusual was afoot. Her mask must remain firmly in place, not showing anxiety nor joy nor trepidation nor hope. 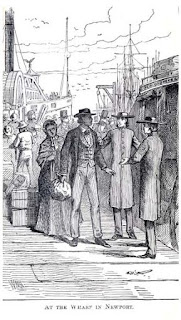 What of that letter that she received from Frederick, notifying her of his safe arrival in New York?How many days did she have to wait for it to arrive? To whom was it addressed? Certainly not her nor her employers. Did he wait until he found the safety of Ruggles' home to send it, or did he post right away? What subterfuge did they use?

How did she herself get away? She had the money to buy the ticket. Did she have to call upon friends to hold her trousseau until she could slip away, pretending to go to market or church or on some other errand, then meet her friends to collect her baggage before she caught her own train north? How did her employers react when she did not return? What friends did she leave behind who, as her husband said of his own, "I loved almost as I did my life, -- and the thought of being separated from them forever was painful beyond expression"?

Did the people she left behind include family? Remember that she had eleven brothers and sisters, perhaps some in Baltimore. Indeed, Frederick's outing of his own identity in his Narrative, while placing them all in danger of his return to slavery, allowed Anna the opportunity to reconnect with her own family, if she had not already done so. Her younger sister Charlotte began appearing in the records after this point, and moved in with the Douglasses in Rochester in the 1850s. Was she among those whom Anna left behind in Baltimore? How did they find one another again?

As she travelled, did she worry that she might encounter some visitor to her employer's home who might recognize her and ask questions? Did her heart break for the people she left behind? Or did she rejoice that she travelled toward a husband, maybe a baby in a year or so, a home to call her own? Did she feel that she was off on a great adventure? If she did, she had no idea how much of an adventure the next forty-four years would be.

What, too, would an older, Anna, further along on that adventure, advise that younger woman, sitting on that train, speeding toward the young, unemployed and penniless man with so much potential, waiting to marry her and "share the burdens of life"?