I was wrong. It's definitely not the first time. Sadly, it will not be the last.

Today I went to the Rochester Museum and Science Center library to look in the Howard W. Coles collection. Coles was a resident fellow at the Museum before his death in 1996, so his extensive papers relating to his research into Rochester's African American history was donated to its library by his daughter and granddaughter in 1998. It's an interesting collection, and includes a few items related to Frederick Douglass.

That,  however, is not the point, nor what I was wrong about. You see, while I was waiting for the librarian to retrieve the papers, I started reviewing some of my notes and came across those that I took about the interments in Mount Hope Cemetery. Suddenly, some of the bits that I had transcribed without really thinking about them at the time, all came together and made sense.

Remember the Porter mausoleum? Wrong Porters. The Porters mouldering within the mausoleum were not the Porters in which I was interested and, most likely, did not keep the bones of little Annie Douglass company. 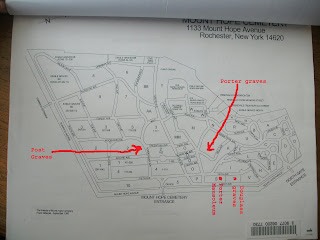 I hope you can embiggen it. Down there at the bottom to the right you can find the Douglass graves. The Porter mausoleum stands out prominently in the section next to it. If you are looking for the Douglass graves, and you know that Annie Douglass had been buried with the Porters, then naturally, you assume that the Porter mausoleum is the place. The lack of names other than "Porter" does not disabuse you of that assumption.

That section, however,  is Section S. In the interment records, the Porters whose letters I had been reading and who figure most prominently in the Douglass story are actually buried in Section G -- or so I discovered upon my browse through my notes. Section G sits on a hill, high above a gunky green pond. So, I drove up there and started to wander about. Their graves are in spaces 65-70, not exactly helpful information when there are no clearly visible numbers on most of the plots. Nevertheless, I soldiered on because I simply had to see the right graves. As Digger told me, you can learn a lot from the graves, if you know how to read them. Not that I know, but even the wholly ignorant can pick up something from the stones and arrangement of the graves. Just wait until I get down to writing about the Douglass gravestones.

Fortunately, I didn't have to wander too far before I saw this: 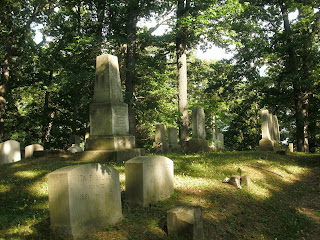 The name "Farley" stood out on the tall monument.  The Porters and the Farleys were intermarried in one generation (not as oddly as the Posts, however, but that's another story), so I knew I was close. Sure enough, the graves on the far side of the monument are the Porters: 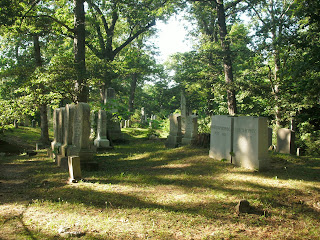 Samuel Porter was the oldest of this clan. He lived into his nineties, and the interment record says that he died of "old age." ﻿ 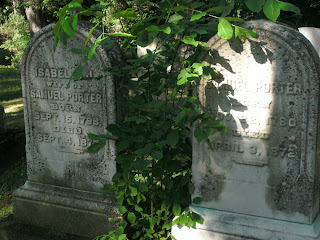 His second (or was it his third?) wife was Isabella Porter. She and Samuel's daughter, Almira, ran a girls' school in Rochester: 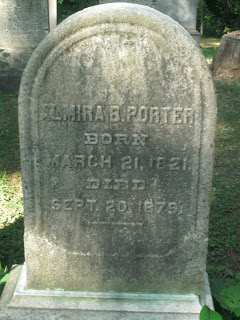 Samuel's son was Samuel D.  Porter, to whom Douglass gravitated as he became more invested in the use of party politics to end slavery.  Porter was also one of the people who has actual documentation recording his assistance to fugitive slaves. In 1851, when three men appeared at Douglass's doorstep fleeing the law after the Christiana Riot, Douglass turned to Porter for help in getting them safe passage to Canada on the actual railroad. Five years later, Samuel May and Jermain Loguen turned to Porter, asking him to provide a better stop than their own in Syracuse. 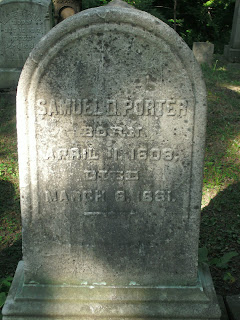 His wife, however, was one of the two women who will probably become prominent in the book. Susan Farley Porter was president of the Rochester Ladies' Anti-Slavery Society of which Julia Griffiths was the secretary. The RLASS asked Frederick Douglass to deliver his "Fourth of July" speech to one of their meetings. When I go to Michigan to see their papers, I will have a better idea of their activities (I hope!) and their relationship with Douglass. 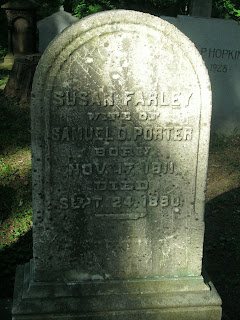 Maria G. Porter, Samuel D. Porter's sister, was a governess and a boarding house keeper (as best as I can tell). She was also the treasurer of the Rochester Ladies' Anti-Slavery Society. She may have been the person who provided Julia Griffiths with a "respectable" place to live when Griffiths was accused of causing "trouble" in the Douglass household, although I'm not yet certain. I have to track down a primary source on that one. In any case, here lies Maria G. Porter: 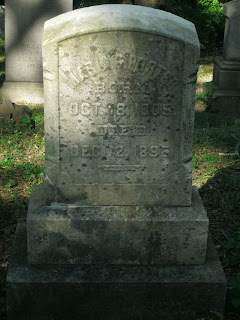 From what I understand -- again, I need a primary source on this -- Annie Douglass was interred in the Porter family plot. A 2003 issue of the Mount Hope newsletter, the Epitaph, says she is buried with the Douglasses, but the cemetery researchers told me in answer to a reference e-mail request that she was buried with the Porters. Since Douglass and Samuel D. Porter were such close associates, since Susan and Maria were also closely allied with Douglass, and since the Porters in the mausoleum are not among the abolitionist Porters, then Annie was probably buried here.

So, what does this all tell me? I don't know. This is all a footnote of a footnote, which is what this blog is for.
Posted by Leigh Fought at 10:09 PM