Not that Frederick Douglass on the Fourth of July

Most people do know -- or should know -- about Douglass's "What to the American Slave is the Fourth of July" speech, given at the invitation of the Rochester Ladies' Antislavery Society to their 5 July 1852 meeting.  If 1852 was bad, two years into life with the Fugitive Slave Act, March 1857 brought the Dred Scot decision, which said that African Americans were "beings of an inferior order, and altogether unfit to associate with the white race, either in social or political relations, and so far inferior that they had no rights which the white man was bound to respect."

This editorial appeared in Frederick Douglass' Paper that year, on 10 July 1857: 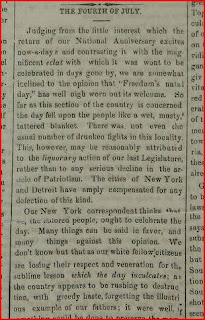 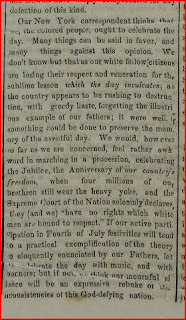 THE FOURTH OF JULY.

Judging from the little interest which the return of our national Anniversary excites now-a-days and contrasting it with the magnificent eclat with which it was wont to be celebrated in days gone by, we are somewhat inclined to the opinion that "Freedom's natal day," has well night worn out its welcome. so far as this section of the country is concerned the day fell upon people like a wet, musty, tattered blanket. There was not even the usual number of drunken fights in this locality. this, however may be reasonably attributed to the liquorary action of our last Legislature, rather than to any serious decline in the article of Patriotism. The cities of New York and Detroit have amply compensated for any defection of this kind.

Our New York correspondent [James McCune Smith] thinks that we, the colored people, ought to celebrate this day. Many things can be said in favor, and many things against this opinion. We don't know but that as our white fellow citizens are losing their respect and veneration for the sublime lesson which the day inculcates; as the country appears to be rushing to destruction, with greedy haste, forgetting the illustrious example of our fathers; it were well something could be done to preserve the memory of the eventful day. We would, however so far as we are concerned, feel rather awkward in marching in a procession celebrating the Jubilee, the Anniversary of our country's freedom, when four millions of our brethren still wear the heavy yoke, and the Supreme Court of the Nation solemnly declares they (and we) "have no rights which white men are bound to respect." If our active participation in Fourth of July festivities will tend to a practical exemplification of the theory so eloquently enunciated by our Fathers,  let us celebrate the day with music, and with [illegible]; but if not [illegible] thin our mournful silence will be an expressive rebuke of the inconsistencies of this God-defying nation. 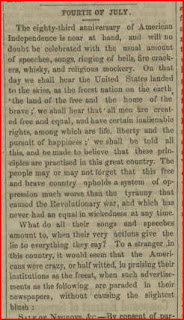 The eighty-third anniversary of American Independence is near at hand, and will no doubt be celebrated with the usual amount of speeches, songs, ringing of bells, fire crackers, whisky, and religious mockery. On that day we shall hear the United States lauded to the skies, as the freest nation on the earth, "the land of the free and the home of the brave;" we shall hear that "all men are created free and equal, and have certain inalienable rights, among which are life, liberty and the pursuit of happiness;" we shall be told all this, and be made to believe that these principles are practised in this great country. The people may or may not forget that this free and brave country upholds a system of oppression much worse than the tyranny that cause the Revolutionary war, and which has never had an equal in wickedness at any time.

What do all their songs and speeches amount to, when their very actions give the lie to everything they say? To a stranger in this country, it would seem that the Americans were crazy, or half witted. In praising their institutions as the freest, when such advertisements as the following are paraded in their newspapers, without causing the slightest blush:

No doubt they will have a good time at that sale, as we see no other plan advertised for celebrating the "4th" at that place; and any person who doubts that the United States is "the land of the free and the home of the brave," let him attend on that occasion.