"The Bay Window is Now Finished"

I love finding little pieces in different documents that fit together like a puzzle, even if they are inconsequential.

In her memoir of her mother, Rosetta told a story about Anna Douglass's "grim humor":

On one occasion several young women called upon her and commenting on her spacious parlors and the approaching holiday season, thought it a favorable opportunity to suggest the keeping of an open house. Mother replied: “I have been keeping open house for several weeks. I have it closed now and I expect to keep it closed.” The young woman thinking mother’s understanding was at fault, endeavored to explain. They were assured, however, that they were fully understood. Father, who was present, laughingly pointed to the new bay window, which had been completed only a few days previous to their call.[i]

I had always assumed that took place in Rochester, perhaps because my research was stuck in Rochester or because Cedar Hill really doesn’t have a bay window that might fit the description, at least not on a floor where Anna might receive company.

Then I came across this letter from Louisa Sprague, who had temporarily taken the Douglass last name, writing to Frederick, who was passing through Rochester on his way back from a tour through the West. The “West” in those days meant St. Louis, Illinois, Iowa, Nebraska, and Michigan. She updated Frederick on the household:

We are very sorry to here that sister Rose is so sick. Mother got a letter from Brother Nathan yesterday saying that she was very sick but he did not say what was the matter. Mother was very unease untell I got your letter to day. We were glad to here that you have left Omaha for Mother was very unease a bout you as well. the Bay Window is now finish. We have been visiting the Capitle and the house this week.  the weather has been very coal here. Mother and Miss pieran sends love to you. We had little Fred a one night with us. your daughter


Charles Douglass, now living in Washington, D.C., too, looked in on the ladies and reported:

On Sunday morning last I took mother, Miss Peirce, and Louisa to the Presbyterian Church in the large carriage. It was a beautiful day, and to day seems like spring. Ladies are out with parasols. The bay window has been completed, and is now ready for use.[iii]

Lou, incidentally, liked the carriage, especially when she could drive (but that's another story).

The Douglasses lived neither in Rochester nor on Cedar Hill in 1873. They had just moved to A Street, NE, that June, after their house in Rochester had burned down. Louisa joined them in October (that is also another story).

This house was located just behind the U.S. Capitol, Supreme Court, and Library of Congress -- near the Folger Shakespeare Library, which would have pleased Frederick.  When Louisa says that they went to visit, they only had to walk a block or two. Frederick was in the thick of things there, and so was Anna. She had never courted the limelight or the type of upper class socializing that required holding an open house. She had things to do.

I like that Frederick was amused by her way of expression. He was a man who appreciated words and, with his love of Shakespeare, appreciated a good pun. They may have had divergent differences over the decades, but if she could make a play on words, there was something about her that he appreciated beyond her housekeeping skills.

Here is the house with the bay window back then: 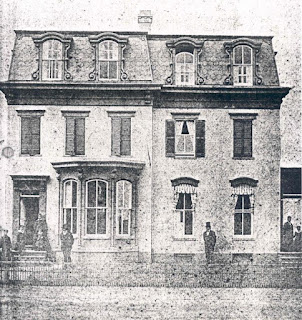 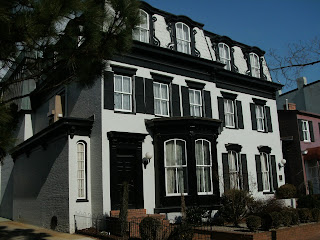