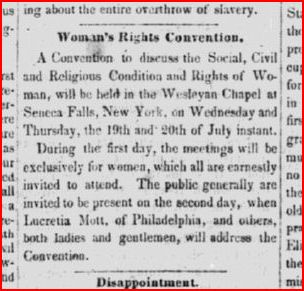 A Convention to Discuss the Social, Civil and Religious Conditions and Rights of Woman, will be held in the Wesleyan Chapel at Seneca Falls, New York, on Wednesday and Thursday, the 19th and 20th of July instant.

During the first day, the meetings will be exclusively for women, which all are earnestly invited to attend. The public generally are invited to be resent on the second day, when Lucrectia Mott, of Philadelphia, and others, both ladies and gentlemen, will address the Convention.

Also on that day, Douglass wrote to Elizabeth McClintock, one of the organizers of the convention:


Dear Elizabeth,
To be sure I will do myself the pleasure of accepting your kind invitation, to attend the proposed woman's convention at Seneca falls. I think that one or two or more of the Post family will be present also. Your notice did not reach me in time for this paper -- but happily I received one from our mutual Friend Lucretia Mott.
With Dear love to the family I am most sincerely, Yours
Frederick Douglass

If you are in the Seneca Falls vicinity next weekend, you may be interested in attending their Convention Days Celebration, where they will be displaying the original of Douglass's letter to McClintock, Elizabeth Cady Stanton will give a tour of her home, and Elizabeth Smith Miller will speak on dress reform (she wore the Bloomer costume before Bloomer did), among many other interesting programs.

Sadly, I shall be schmoozing  attending to business at a conference in Raleigh, NC, this year, but I've gone in the past and they put on a top notch show with many a woman's rights history nerds -- always a fantastic experience!