I just can't quit you, Douglass!

Seriously, being a historian is all about asking questions that are usually answered with more questions.

One big question has to do with Anna Douglass's parents. 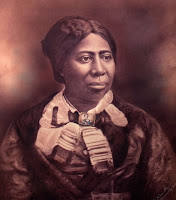 Just an aside, I've noticed a tendency on the internet these days to not only call her Anna Murray Douglass, but to hyphenate her last name to Anna Murray-Douglass. If you do that, realize that she never went by either as far as the documents suggest. She was "Mrs. Douglass." Just like Mary Todd Lincoln never went by that name, as Catherine Clinton pointed out. Hyphenation is a product of the late-twentieth century feminist movement. "Anna Murray Douglass" was Rosetta Douglass Sprague's designation at a time when some women did include their maiden names in their full name, as Rosetta did, to honor their own lineage. Everywhere else, she was "Mrs. Douglass" or "Anna Douglass." There once was a time that wives took that as almost a professional title that they had earned because being "Mrs. Husband's Name" was a job.

One thing that I've noticed in this heritage-history debate and in trying to understand the lives of otherwise silent women in the past, is that the craft of history involves the effort to understand individuals in their time, place, and circumstances while the work of heritage preservation has more to do with the present and the employment of the past to serve a purpose in the present. History turns heroes into humans, heritage turns humans into heroes.

Anna Douglass's father was Bambarra Murray of Caroline County, Maryland, and that was about all that Rosetta Douglass Sprague knew about him. When researching her family back about a decade ago now, his named sounded African and I soon learned that Bambarra was actually a group of people. Of course, given the lack of curiosity of slave traders beyond any information that would help them make a better profit and prevent uprisings, designations of people, including classification of them as "tribes," let to a gigantic mess of assigned ethnicities and affiliations. Perhaps at some point, Bambarra, his father, or his grandfather, had either been called a Bambarra so often as to have that become his name, or maybe in the retelling "he was a Bambarra named Murray" became "he was Bambarra Murray," or maybe he was named Bambarra as a tribute to his or an ancestor's origins. Indeed, now that I'm thinking about it, my assumption was always that this ancestor was a male. 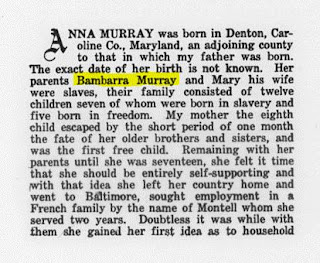 In any case, in investigating him, I confess to rather giving up the ghost early. I had classified him as a contemporary of Harriet Bailey, maybe slightly older, putting his birth in the 1780s or 1790s. The transatlantic slave trade had pretty much ended in Maryland by that time. Not only did Congress suspend it during the War for Independence, but the Chesapeake states actually supported its permanent end because their enslaved population had grown of its own accord. You can see that in the large, extended Bailey family (subject of Ezra Greenspan's current research for what will probably be a brilliant book) at this point in its history. If Bambarra were born in the time I estimated, then he could not possibly have been African unless he came through the Caribbean, and even then the trade was a bit iffy because of the blockades and fighting that resulted from the American war, the French Revolution, the British fighting with the French, the Haitian Revolution and everyone else piling on. Long story short, I came to the conclusion that Bambarra, however far removed from Africa, more likely hailed from right there in Maryland.

I moved on with my research.

Then Elizabeth Hemings's mother and the way her great-grandson told their story began to fascinate me in the sort of way that makes me wish I had Hilary Mantel's skills. In researching her, I once again came across the word Bambarra, and once again thought about Bambarra Murray the person.

The Bambarra people lived on the upper Senegal River, spoke Malinke, and traded with the French, which meant that they were also traded by the French. According to Ira Berlin in Many Thousands Gone, they had a reputation for warring against Muslims and the Mandika. If you remember Roots, Kunta Kinte identified himself as Mandika from the village of Juffure. The miniseries gives the impression of a tiny, isolated town, but Don Wright's work on the Gambia will tell you that it actually was a major trading post on the mainland from the English fort. There they traded in captives who became slaves bound for the Americas.

In other words, whoever the real Kunta Kinte was, his family would have traded in Anna Murray's ancestors, who would just as easily have traded in Kunta Kinte's family. After all, Berlin wrote that the Bambarras' martial prowess had such renown that their name became synonymous with black soldiers on both sides of the trade, both captor and captive. Neither the Kunta Kinte side nor Bambarra Murray side would have considered one another as "African" in the sense of a common, homogenous identity, either. As Saidya Hartman put it in Lose Your Mother, "They sold strangers: those outside the web of kin and clan relationships....In order to betray your race, you had first to imagine yourself as one." That imagining began in the hold of a slave ship.

As I started to retrace Annette Gordon-Reed's steps -- not because I doubt her but because you must in order to see what other historians have seen and to see if you see something yourself -- I looked into the Transatlantic Slave Trade Database. (That's when I started putting pieces together on my "Upper James River" and "Bermuda Hundred" puzzle.) Now, I'm sure I played with this in my research before, but obviously didn't really know what to do with it, or tried to do the wrong thing with it. I'm learning that different centuries also require different strategies for research and different ways of thinking in ways that I can't articulate at the moment. In any case, I approach it as if the eighteenth century were the nineteenth century, just earlier, rather than something different entirely. Now, I approached it as the eighteenth century, which made a difference. Again, I don't quite know why. Also, I think they changed some of their interface and search capabilities in the meantime, but I could be wrong.

Putting in a search that narrowed the landing place to Maryland both for the Transatlantic and the Intracoastal trade, I found voyages that landed at Oxford as late as 1773.

Oxford? That's awfully familiar. As in Talbot County familiar. The red thingy marks Oxford on the map below. St. Michael's, where Douglass lived for a short time as a teenager, lies to the northwest, Easton, where he was held in jail and where there where the slave trader Austin Woolfolk bought and sold people bound for the Mississippi cotton fields lied to the northeast. Tuckahoe Creek where Douglass spent his first four or five years is marked further northwest, and Denton on the other creek further to the east. (Down at the bottom, just above the Google insignia, you'll find Cambridge, Harriet Tubman territory.) Given Oxford's proximity to Denton, the place named by Sprague as her mother's birthplace in her , and the access by water, that seems a more likely entry point for African captives, especially so late in the business, than Annapolis, which lies much further north on the Chesapeake. 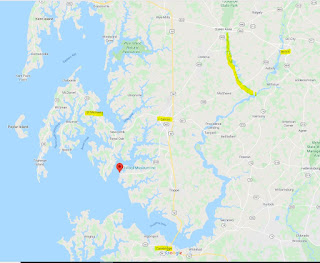 Also, these voyages gathered their captives in Saint-Louis and the Gambia. Both places traded in Bambarra people. Saint-Louis is marked with the red thingy on the coast of Senegal on the map below, and the Gambia is further along the coast to the south, a tiny finger of  a country reaching inland. The Bambarra peoples lived kind of in the middle there, on and past the border of Senegal, to the best of my knowledge (which I will admit has significant limits on this topic.) 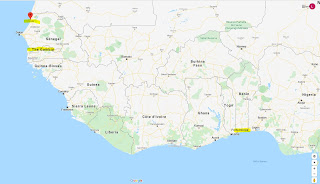 Then, I thought, "I'm a bonehead!" I had placed Bambarra in Harriet Bailey's generation, her contemporary. Yet, not only was Anna older than Douglass, she was the eighth child of her parents. Bambarra might more likely have been the contemporary of Betsey Bailey, Douglass's grandmother, who was born in 1774 (a year after Sally Hemings, by the way). Men can have children for much longer than women, too. So, he could have arrived as a child, as Denmark Vesey had, on one of these voyages? Or could his father or mother have arrived?

One thing seems sadly certain, what every Bambarra knew of Africa, either directly or through a parent or grandparent, almost none of it seems to have made its way to his most famous son-in-law whose curiosity about Africa, especially later in life, would have made him want to know.

The same thing seems to have happened with Elizabeth Hemings' mother. What she knew of Africa, even her own name and the name given to her in Virginia, disappeared.

I wonder if, for some of the people who survived, the remembering hurt too much. To retell would be to relive, and living the first time was far too much.

This also makes me think of the point of Saidya Hartman's book. We white Americans like to relish in our ancestry in Europe, even if Europeans laugh at us for thinking that Ireland is all shanties and Gaelteach, or Scotland is all kilts and "Skye Boat Song," or Germany is dirndls and Oktoberfest, or Italy is pasta and wine. Even if we find out that the reality isn't the imagined land, we can still rest in the sense of coming back to a place that our ancestors build and we call home. Black people cannot. Hartman contemplates that loss of that imagined land, but also the sense that, although your people built the United States, you are still made unwelcome. Somewhere in there is a reason that Bambarra's, whichever one came from Africa, and Elizabeth Heming's mother's stories slipped away.

This also seems to be part of the equation for Sally Hemings in thinking of her children's future. Home, or homelessness? She had to be mercenary about it, in some sense, don't you think?  For Douglass, the theme song in my head was "Motherless Child."


For Elizabeth's mother and for Bambarra, it is the Ladysmith Black Mambazo parts of "Homeless."