First up, Dr. Walter O. Evans of Savannah, Georgia, has donated his Frederick Douglass collection to the Beinecke Library at Yale University, for which we can all thank David Blight, who facilitated the gift. This collection has -- jeez, I lost count but -- many scrapbooks that include so many clippings and family information about Douglass for the later years of his life. The charming, insightful, heartrending letters from Lewis Douglass to his fiancée, later wife, Amelia Loguen form part of this collection as well. If you want a sense of its richness, you can take a look at the shockingly reasonably priced, "If I Survive," which reproduces and transcribes the documents, but not the scrapbooks. 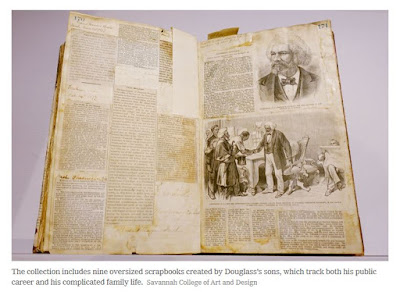 While research at the Beinecke won't be the same as sitting in the dining room of his beautiful Savannah townhome and talking of your research with him at the end of the day over a glass of wine, all while surrounded by the art of such luminaries as Jacob Lawrence and Edmonia Lewis, it will do. Certainly more people will have access, with less intrusion upon Dr. Evans and his wife. Much gratitude to him, David Blight, and everyone involved in this deal. My condolences to the other repositories that wanted the collection. 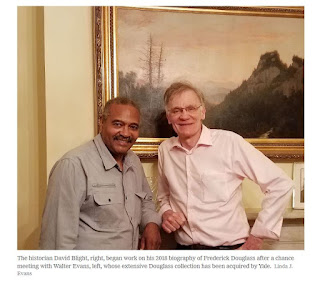 (Oh, and when you read the article, click on some of the links. That's the closest that me or my work will ever get to being in the New York Times, and I'll take it! Thank you to Dr. Evans, David, or the reporter, whoever took notice. Score for us Nobodies from Nowhere teaching at Places You Never Heard Of! My gratitude to Evans, Blight, and Stan Deaton of the Georgia Historical Society, who provided the introduction to Dr. Evans and access to the collection ten -- jeez! Has it been ten? -- years ago. All three were important parts of the final project.)
>
Second fall more under Six Degrees of Frederick Douglass. Thanks to my husband's daughter's Disney Plus account, we were finally able to see Hamilton. We actually had the opportunity when the tickets were expensive, but not prohibitively so, and before it hit big. (I thought I would just be another Bloody, Bloody Andrew Jackson -- who knew!) We chose instead to see a play downtown based on Marcus Rediker's Slave Ship. Four tickets for it cost as much as one for Hamilton, at the time. The paly was intense, and we sat practically on the stage in the front row; but good thing we don't invest in the stock market.

Anyway, Hamilton is a brilliant piece of musical theater. It's only flaws have to do with its source material and Lin Manuel Miranda's emphases that downplay the historical Hamilton's considerable warts (owned slaves, anti-immigrant despite his own background, elitism, monarchical tendencies, even the crack of dawn not save around him....). Still, I'd wholly recommend just for the genius of the lyrical and musical motifs alone, and the color blind casting never lets you forget that the men portrayed as fighting for freedom did not really mean freedom for the people who are right now playing them.

Can we all pause for a moment and praise the brilliant talent that is Leslie Odom Jr.? What a Triple Threat! He played Aaron Burr (sir). Where have you also seen him? Playing William Still in the film Harriet. You don't have to go too far to connect Still and Douglass, of course. 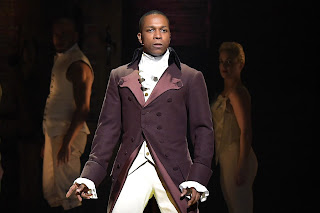 Even better: the actor playing the Lafayette/Jefferson role, Daveed Diggs, the one with the fabulous hair who rivets attention in every scene?: 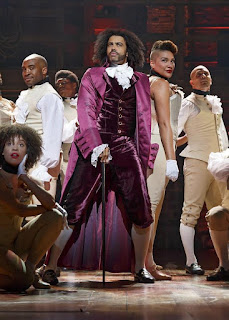 He will play Frederick Douglass in the Showtime series The Good Lord Bird, this September.
>

You see him at the one minute mark. How many actors can say that they played both Thomas Jefferson and Frederick Douglass?

The series looks intriguing, but I confess to having passed on the book for a variety of reasons. The long one involves my three stacks method that has developed from having reading as a integral part of my job and as a hobby. Stack One includes all books for research. Actually, Stack One is more like a fort made out of books. Books for class or for prize committees make up Stack Two, which is more like a complex. Some overlap occurs between One and Two, but the majority of classes that I teach are world civilizations and therefore fall very far outside Stack One.

Then, Stack Three, fun books. Fiction, preferably with no relation to work. I won't even pretend to be literary or intellectual here. That's the rest of the day. I love me some historical fiction, but it absolutely CANNOT be about the antebellum U.S. unless aliens or time travelers appear or something occurs that places the story into the realm of magical realism or fantasy or science fiction. I get too picky. So, Underground Railroad by Colson Whitehead, yes. Invention of Wings by Sue Monk Kidd, no. Octavia Butler, yes. Jennifer Chiaverini, no. I just know too much about the era and become far too critical.

So, Good Lord Bird by James McBride would not have been on my list for that reason. Then, my husband read it out of curiosity. We have oddly different places where we forgive artistic license. He said, "absolutely not!" to Underground Railroad when he heard that it involved an actual railroad underground. I said, "this could be interesting," and was wholly rewarded. Good Lord Bird sounded interesting to him, but his tales of a fat, drunk, womanizing Douglass, not made any better by interviews with the author? Well, them's fightin' words! Also, life's too short and there are too many other books to waste time on something that will piss me off when I just want to escape. 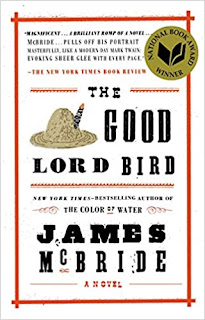 Still, Daveed Diggs as Douglass, and the clips of him in this trailer. Also, Ethan Hawke not annoying me. Now, they have my interest. Dammit. I'm going to have to read the book. Of course, we don't have Showtime, so it will be next year or the year after before I see the series. Kind of like being the last historian in my field to see Hamilton.

Saving the best for last, young descendants of Frederick Douglass read his "What to the American Slave is Your Fourth of July," delivered in Rochester, at the invitation of the Rochester Ladies Antislavery Society, on the Fifth of July 1852.