***Rochester Ladies' Antislavery Society Papers now digitized and searchable from the William Clements Library at the University of Michigan - Ann Arbor. This collection helped me so much! You see Julia Griffiths as an abolitionist, and a bit of a pain in the butt, but still, someone working with a set of women who were just as committed to ending slavery, but not really committed to being under the umbrella of the American Antislavery Society. You see the Douglass family all through their account books, allowing you to surmise their work at the newspaper office and its position as a headquarters for receiving the people headed for Canada. You can read the letters of Julia Wilbur as she roams the freedpeople's camps of Alexandria with Harriet Jacobs at her side. When I researched in them, I'd sit there, completely absorbed, skipping the afternoon tea the library held because I wanted to know what happened next. Now they are available to all researchers with an internet connection. 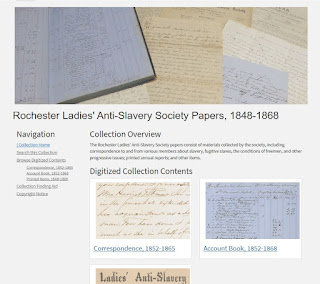 ***Frederick Douglass (and Booker T. Washington) descendant and founder of the Frederick Douglass Initiatives Kenneth B. Morris, Jr., sits for a recreation of his forefather's portrait. Wow! That first shot of him in full make-up is astounding! 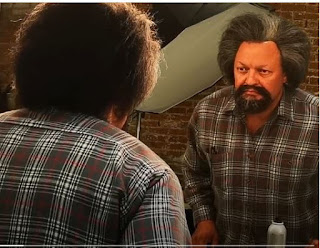 The Morris/Douglass portrait was part of artist Drew Gardiner's project to recreate old photos with the descendants of their subjects. A Hemings-Jefferson descendant, Shannon LaNier sat for a Jefferson portrait, echoing but not precisely recreating his ancestor. The result has a different sort of power.: 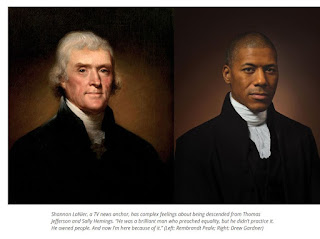 ***Because racist is as racist does, someone decided that attacking one of the statues of Frederick Douglass in Rochester was a good way to celebrate the Fourth of July, thus proving Douglass's proposition in his Fifth of July speech and the message of the Black Lives Matter movement. Last time, the vandals turned out to be a couple of drunk and ignorant college d00dz ("drunk and ignorant" is a bad combination). This time, we await an arrest, but I will not be surprised if a Confederate flag and a MAGA hat are involved somewhere, along with a cry of "there is no racism, it's a liberal media lie." 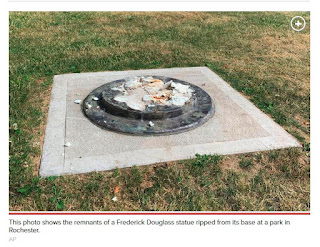 ***This past Tuesday, readers of USAToday could learn about Anna Douglass as they enjoyed their Continental breakfasts and coffee at hotel and motels across the nation. Good work, N'dea Yancey-Bragg! (Oh, and look who actually answered her e-mail and phone in a timely manner to provide some information for the article.)