In Savannah, I read many letters from Lewis Douglass, Frederick's oldest son, to Amelia Loguen, the woman who became Lewis's wife. Early in their courtship, Amelia lived in the home of her father, Jermain, on Genesee street at the corner of Pine, in Syracuse, New York. Since I went to Syracuse after I left Savannah (with a short pause in Silver Spring in between), I decided to see where all of these letters had gone.

Jermain Loguen was not just anybody in Syracuse. He was a fugitive slave who had become a minister and a leader of the black community in the city. Unlike many (and I'd venture to say most) other alleged Underground Railroad sites, his home is actually quite well documented as a haven for people escaping slavery. In fact, just the other day I read a letter that noted it as such.


Since this is central New York, and since the Underground Railroad is huge heritage tourism business, the location of his home actually has a marker: 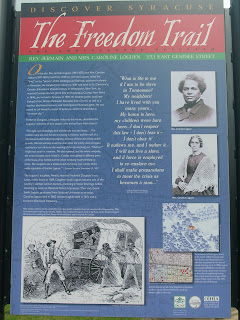 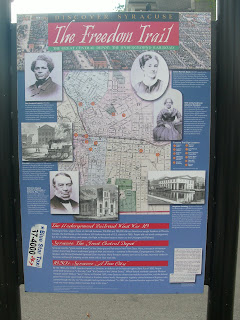 That is him, incidentally, in the upper left corner of the image.

He is also memorialized downtown in the monument to the Jerry Rescue: 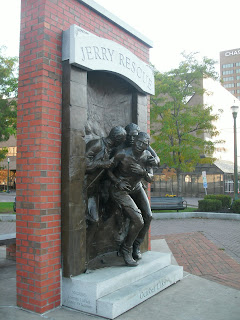 You can't really see him in this image, but he is the figure on the far side of the fugitive slave, Jerry Henry, in the center.  You know Jerry Henry is the fugitive because he is shirtless and has ripped pants. That's the uniform.

Seriously, to make a long and involved story about race and ethnicity and politics and so forth short, Jerry was a fugitive who was being returned to slavery under the Fugitive Slave Act and Loguen pretty led a large group of people who busted him out of jail, where he awaited the slave catchers, and helped him to Canada. Loguen had to take a trip there, too, for his part in the bust.

The canal, incidentally, ran behind this statue.

Getting back to the home. Loguen's home sat on the corner of Genessee and Pine, the second dot from the right on the map below: 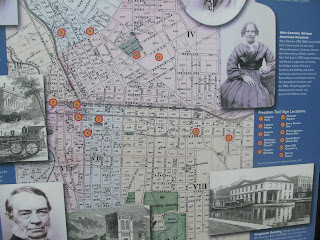 Do you know what is there now, at the corner of Pine and Genesee, beside this sign? 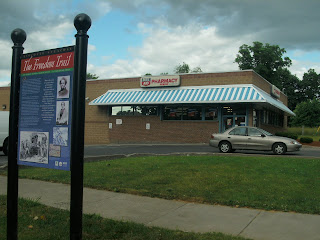 Email ThisBlogThis!Share to TwitterShare to FacebookShare to Pinterest
Labels: On tour, Sites