I ended up going back to Honeoye. Saturday morning, I went to the Rochester Public Library's Local History Room to see what they might have that will help me flesh out the context of Douglass family in Rochester. I'm particularly interested in the African-American community in that area since it works into some of my understanding of Anna and her own sense of community. Sadly, very little scholarly work has been done on African-Americans in Rochester. Happily (especially for her prospects as a historian), a graduate student at University of Rochester,  Monique Patenaude, is working on this subject.

As has been happening all week, I was digging a dry well. There are patterns to the dryness that I will write about later, so dry wells are not a loss. They are, in fact, quite valuable in guiding the way to a more accurate understanding of the subject; but, as I just said,more on that later. In the process of digging this well, I came across one of those WPA Writers' Project guides, this one concerning Rochester and its vicinity. These guides are fantastic in showing historic preservation and routes of travel in the 1930s; and this one included a "tour" that brought the traveller through Honeoye. The "tour" through Honeoye mentioned landmarks: a statue to Major General John Sullivan of Sullivan's Expedition (in)fame, a historical marker for the home of Gideon Pitts, and a historical marker for the home of Captain Peter Pitts. Peter Pitts was one of the earliest settlers of Honeoye and the father of Gideon Pitts; and Gideon Pitts was the father of Helen Pitts, the second Mrs. Douglass. (I may be missing a generation in there. My copy of the biography of Helen Pitts is, unfortunately, not on  hand.)
"Maybe they are still there," I thought. I also wondered, "How could I have missed a whole statue?" Of course, missing a statue may have had something to do with the fact that I had probably not seen the entire town since hunger,  exhaustion, and traffic from road construction made me  conclude that I had seen everything when, as it turned out, I was only about half to three-quarters of the way through the village. So,  after leaving the public library,  and after making a pass through Mount Hope Cemetery to see the Porter mausoleum (I thought it only respectful after having trawled through their family letters all week -- plus,  I'm a bit of a ghoul), I turned my green machine toward Honeoye.

Now alert and also more familiar with the route than I had been two days earlier, I did not miss this sign as I entered the village: 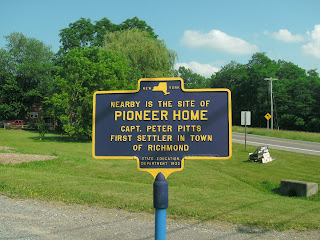 The marker to Peter Pitts's home.

I followed the same path through the village as I had before,  but did not let traffic deter me. Beyond the road work, the street went uphill and past this house: 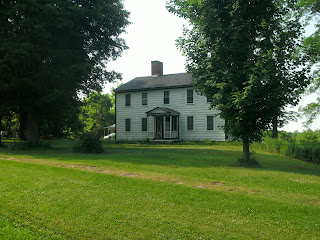 What should be standing in front of this house? This marker!: 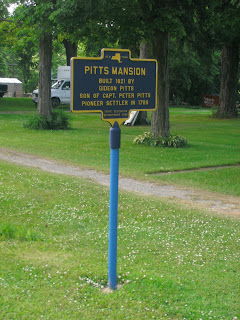 "Pitts Mansion. Built 1821 by Gideon Pitts, son of Capt. Peter Pitts,﻿ pioneer settler in 1789." Also, this was the birthplace and childhood home of Helen Pitts. Whether or not the house is the actual house,  I do not know and someone more versed in architectural history, especially the architectural history of western New York, or the local history of Honeoye could probably tell me more.
I did not find the statue of John Sullivan. I'm not sure if that is good or bad. On the one hand,  Sullivan's Expedition was a nasty, genocidal bit of American history, and a statue celebrating him is not the best idea. On the other hand, with the proper signage, perhaps that nasty, genocidal bit of American history and the reasons certain people  wanted to celebrate it might be addressed. Then, my sarcasm kicks in as I think about how well such attempts have gone in places like Mystic, Connecticut, and Deerfield, Massachusetts, when the older, celebratory statues and signs met with effort to update those sites to include more complicated and current knowledge of the violent historical events that occurred there. Perhaps that is what separates heritage from history: heritage is a celebration of a particular person's or group's past, while history is an attempt to understand the intricate interactions and points of view of the past, without too much identification with any one person or group.
In any case, I find something poetic, or ironic, in the fact that Peter Pitts participated in the oppression of one group of non-white people while his granddaughter challenged the oppression of another group of non-white people. He made war, and she quite literally made love.
﻿
Posted by Leigh Fought at 10:55 AM