On their first full day in Naples, the Douglasses joined a group that included Adelia Gates, a well-travelled botanical artist, which was a common field for women artists in those days, her niece Eleanor Lewis, who subsequently donated Gates's collection to the Smithsonian Museum of American Art, and a Mr. and Mrs. Hipwell, whom Mark Emerson could not identify when he annotated Douglass's travel diary. Helen and Eleanor Lewis had hit it off in Rome, and I confess that I misidentified her as Edmonia Lewis, the African-Chippewa-American artists living in Rome who met both of the Douglasses while they were there. Edmonia Lewis did loan Helen some books, but they did not go to the museums together.

The Capodimonti is today, as then, a large park containing the former Bourbon Palace that serves as both a museum of the palace and of part of the Farnese collection housed in several places. At the top of one of the several hills that surround the Bay of Naples and make up the city, Douglass described Capodimonti as "a splendid place giving us a splendid view of the Bay, Vesuvius, Serento, Capri, and the surrounding country." From images that I could find online, that was probably true in the eighteenth and nineteenth centuries but less so today given the trees that have now grown along the perimeter. The best I could do (also given the weather on the day we visited -- we seemed to have brought the lingering drear of Syracuse, New York, to the Mediterranean with us) was from the second floor of the Palace. Yes, that is the ubiquitous Vesuvius there in the background. The ubiquitous Capri and Sorento were not visible on this day.: 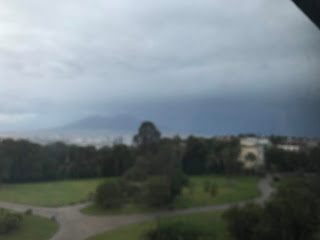 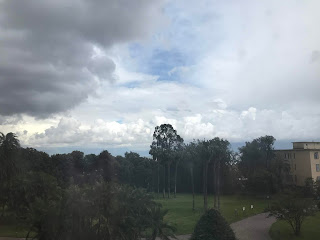 Just as Douglass saw in his time, "The Palace is a plain stately building without,..." : 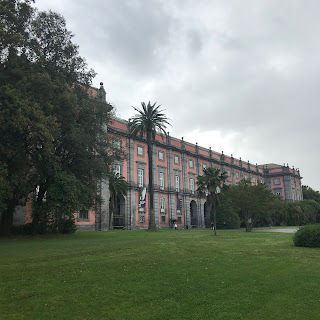 "….but very richly furnished and abounds with numerous works of Art, paintings and statuary." It looks a bit like Versailles in the parts meant to showcase the building as a palace, but not quite so glitzy. They also have an impressive display of armory. The paintings and statuary provided me with much material for a profane running commentary because, as Douglass said the next day when they went to visit a museum at San Martino, "I have seen so much of these religious paintings, that I was less interested in what I found here than in the fine view of the city and the harbor." Soooo many Virgins, and annunciations, and Jesus meeting John the Baptist, and nativities!

Two paintings did capture Douglass's attention. "A picture of the assassination of Julius Ceaser was very striking," he commented. Alas, I looked and looked but failed to see it. Although the arrangement of the art followed nineteenth century conventions, covering every inch of very tall walls to the point that you could hardly tell what some of them depicted, this one is supposed to be massive and difficult to miss.

The other, "one of Michel Angelo, kissing the hand of his dead friend, Vitoria Colonna, fixed attention," certainly did. Hanging directly across from the entrance to the room, with the light of the woman's dress emerging from the dark canvas, the image pulls your attention toward it from several rooms away. 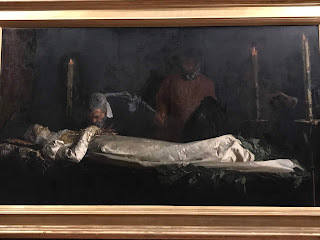 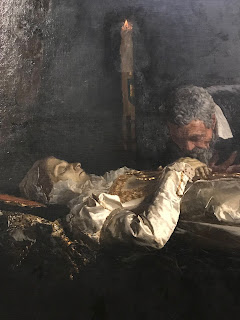 Michelangelo kissing Colonna's hand, clutching his male friend's hand feels so quiet and sad. More than that, this secular image of  loss would affect a man who had so recently lost his own friend of two decades, his wife of forty-four years, and yearly learned of the death of yet another friend or family member. The painting itself was only seven years old itself at the time that Douglass saw it, so would have been fresh and bright, and not mentioned in his Baedeker, as the painting of Ceasar's death was.

Adelia Gates was an interesting companion in this excursion. In her sixties, she was a couple of years younger than Frederick and had spent the Bleeding Kansas years in the state on the anti-slavery side. I wonder if she had some influence on the topic of his speech to the Presbyterian Church, given that Brown first rose to infamy at Potawatomi.

Later, when the Douglasses returned to Rome after their sojourn through Egypt, Helen described her visit to the Capitolini Museum and Vatican in the company of Eleanor Lewis (when I misidentified Eleanor as Edmonia). Adelia Gates was there, as well. After Rome and Naples, Gates turned southward toward Algiers. She wanted to see Carthage, to see the Sahara, and to paint the flora of the oasis. Then, she, too, voyaged up the Nile and through the Holy Land. Gates's biography does not mention if Eleanor was in tow, although she seems to be up to this point. If Gates had already planned to cross the Mediterranean, I wonder if she influenced the Douglasses' decision to go south instead of turn back north as they travelled along the Amalfi coast. While in Rome, I wonder if the Douglasses gave them any travel advisories for Egypt. Either way, imagine what they may have spoken of in their discussions about Africa and what each thought of the origins and meanings of what they, in the nineteenth century, considered "civilization:" she the nice, white lady artist and he through a double veil.