The Chair in the Photographs

Back in December, I dashed off this post about a series of photos of Rosetta Douglass, Anna Douglass, and Amy Post, all of which included the same chair. The chair suggested that the photos all came from the same studio. Based on a letter from Amy Post to her husband, Isaac, and the presumed dates of all photos, I speculated that the photographer was John W. Hurn. I also, for some reason -- I think it was a misreading or confused reading of Picturing Frederick Douglass or simply and unquestioned assumption -- that Hurn was African American.

That post turned out to be rather popular, relatively speaking (as in, more than three people read it).

First, Judith Wellman, who does meticulous work into Seneca Falls, the Underground Railroad, and the multiple local and regional networks of activists in New York State; and two other Rochester historians, Charles Lenhart and Hal Shuler (who has sent me all sorts of wonderful tidbits and documents that he has discovered in his own research into Douglass in Rochester), all noted that John W. Hurn was not just a Philadelphia photographer, telegraph operator, and aid to Frederick Douglass in the aftermath of the Harpers Ferry raid. Hurn had formerly lived in Rochester, where he edited the Rochester Evening News and had married into the Anthony family. That would be the Anthony family of Susan B.

Then, Autumn Haag, Special Collections Librarian and Archivist for Research and Collections in the Rare Books, Special Collections, and Preservation Department at the University of Rochester (and with whom I had a wonderful conversation back in April when I visited there), received a research request about the pictures. Having access to the physical item of the Post image, she simply looked at the back and found that the photographer was not Hurn, but was "Powelson, Photographer, 58 State St., Rochester, NY." Then, she went on a search for other Powelson photographs and -- lo! and behold! -- found the chair as a featured prop.

My favorite is the one of Olive Oatman, who had been captured in Arizona by the Yavapai then later adopted by the Mohave and bore their distinctive tattoo on her chin.: 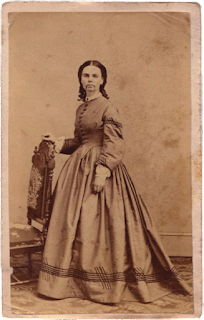 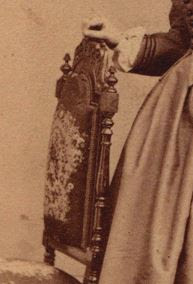 (I remember reading a YA novel about her back in seventh grade, and being thrilled, decades later, to discover that she was a real person.) How many times have I seen that picture in the past year alone and not made the connection? Alas, the perils of dashing off a blog post with minimal diligence!

This now makes me curious about Oatman in Rochester. There must be another story there.

At the same time, let this also be a lesson that scholarship and knowledge comes about through collaboration. I had my pieces and observations. The Rochester group had theirs. The archives had theirs. Put together, we now have this bigger picture. This seems simple, just a chair and a photographer. Yet, this chair and photographer and the process here show the way that all knowledge, small with large, comes together and moves forward, rather than just restates the same stories with rearranged words.
Posted by Leigh Fought at 10:20 AM

Email ThisBlogThis!Share to TwitterShare to FacebookShare to Pinterest
Labels: Photos