The Douglasses, apparently, had been warned that "there was little to see in Naples," but then, does anyone go to Naples to see Naples initially? (Don't answer that.) Instead, they encountered one of the main draws their train approached the city when, Frederick wrote in his diary, "We were startled by a wonderous spectacle, one which almost paid us for our voyage across the Sea."

Even today, Mount Vesuvius remains, in Douglass's words, "a scene of startling sublimity," dominating every view of the bay.

To post a picture will not do the experience justice, a fact that I have learned even as I watch people walk into a scene such as the Sistine Chapel, or a stunning view of the Colosseum or Niagara Falls or the Hall of Mirrors in Versailles or whatever else. The picture will never capture that three and four dimensional sense of awe of being there. The act of snapping the photo is simply a futile attempt to do so. Yet, here I am, posting a photo to illustrate. I confess that none of these are of the train's approach because, much like Douglass, I found the mountain (which I have wanted to see since I was of an age to be counted in single digits) to have overwhelmed me, beyond the desire to photograph. 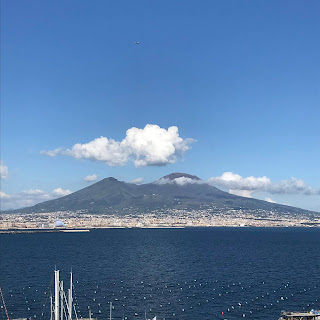 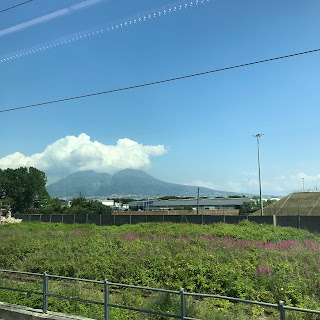 When the Douglasses saw Vesuvius in January of 1887, they witnesses a mountain only relatively recently erupted. It had blown its top only fifteen years earlier in 1872. It would again, seventeen years on, in 1905. They witnessed the volcano midway between eruptions. This accounts for his descriptions, in his speech later that year,. of  "a vast volume of vapear and smoke converted by brilliant sunbeams into snowy whiteness and grandly floating off over the blue Mediteranian [sic]" in his diary and, in his speech and autobiography, the added details that "the lurid light of red hot lava, have been rising thus from the open mount of [Mt. Vesuvius] this mountain, and its fires are still burning and its spoke and vapor are still ascending and no man can tell when they will cease, or when they will burst forth in [fires] burning floods [of lava]…."

Given his own interest in photography, he may have been interested to know that the 1872 eruption was photographed. 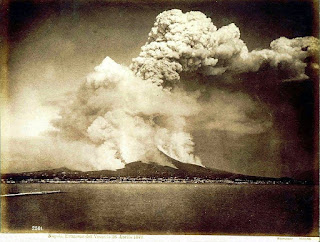 The last big blast took place in 1944, just after World War II. (My intrepid companion commented, "let that be a lesson to those who would follow fascists.") I myself also had to agree with Douglass, "It is a grand [sight to see] spectacle [of], this smoke and harmless vapor silently and peacefully rolling up the sky and moving off to sea, but [one must] we shudder at the thought of what may befall the populous towns and villages that still hover so daringly about [the base of the firey mountain] its base." It is still a sleeping dragon, and the population around it much larger than in his day. Even a small explosion could wreak such devastation.