Back to Douglass on his Grand Tour, which I left off two years ago after my vacation to Italy. Let's jump ahead to Naples, mostly because I just returned from a visit there last week.

After an autumn and early winter in Paris, through France, and in Rome, Frederick and Helen journeyed further southward. In his travel diary, Frederick characterized the trip by train as "a pleasant ride of six hours," which came in under Baedeker's estimation of "7-10 hours." Today, the journey last just over an hour; and, unlike the Douglasses', which he described as "delightful" in a speech later that year and "beginning with rain and ending with sunshine" in his travel diary, ours traversed through varying shades of gray. (We seemed to have brought the Syracuse weather of May with us.)

Today, the tracks run through cuts and tunnels, both underground and of trees, to baffle the sound. You no longer see the "splendid view of miles of Roman arches over which water was formerly brought to the city" that Douglass recalled of the trip in Life and Times. The Baedeker that he probably used points out that passengers should look to the right where "rise the arches of the Acqua Felice and the Acqua Marcia, and beyond them are the tombs of the Via Appia." Walls of graffiti, post-World War II and later twentieth century high rises now stand in the way of much of this sight. 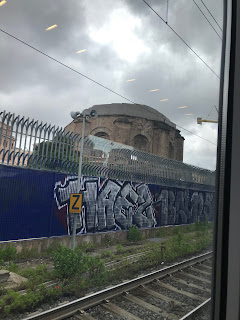 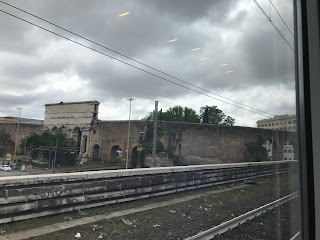 Then, again, given Rome's ages-old history of graffiti and the working nature of railroads, the view may not have differed that much beyond the details. Douglass could have just thrown in the contemplation as a prefix to saying, "Few works better illustrate the spirit and power of the Roman people than do these miles of masonry." On this trip, he had begun to make an argument that Roman civilization was a product of the amalgamation of people, and of course some of those people came from Africa. So, when he followed that observation by noting, "Humanly speaking, there was nothing requiring thought, skill, energy, and determination which these people could not and did not do," he offered more than the history lessons that today's tour guides do when they say "nothing is new" as they point out some ancient Roman ingenuity that we still use today.

If you are interested, Robert Levine has a fantastic article on this topic, "Road to Africa: Frederick Douglass's Rome," in African American Review, 34, 2, Summer 2000: 217-231. Sadly, it is only available through subscription. Levine is a literary scholar who also understands and respects the craft of history. He just did not include the piece that Frederick travelled with Helen, his white wife.

(Again, if my students or Erik Chaput's, whom I am visiting in a few weeks, are reading this, here is what I hope you to do in your research projects: find that piece that you see missing in the books and articles that you read about your topic. Then, make your paper about that piece. You will have so much more fun and find your own voice so much more quickly.)

Although Douglass wrote about the marvels of Roman engineering in the latest iteration of his travels, during the journey he instead pondered "the snow clad Apennines, delighting our eyes as we rode along with their changing forms, and lofty heights."  We saw no snow because, after all, Douglass travelled in January and we in June. Still, when offered a view, passengers today can still see something like his view of "well-tilled fields, spotted here and there with heads of sheep." (The train moved too fast to capture a good picture of the sheep, but I assure you that they were there. City folk like us always get excited to see cows and sheep and such.) 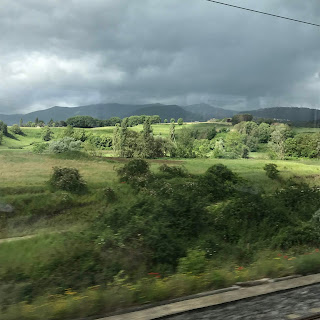 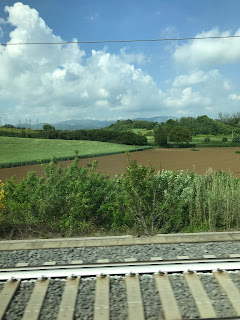 He also wrote that he saw "occasional groups of women, in picturesque head gear, hard at work with spud and hoe, among the vines and garden." We did not see anyone working in the fields when we passed, but they are most likely automated these days. When we were at an exhibit at the Royal Palace, I came across a painting from the 1850s, thirty years before Douglass's visit, describing just such a scene.


I also noticed similar headscarves on images of women in surrounding paintings.:


This passage also echoes an earlier one in his diary from only a week earlier on the train between Pisa and Rome. More importantly, however, in his speech of later that year and again in his autobiography, he makes the connection between the folkways of the people in the southern French and Italian countryside and what social scientists today call cultural diffusion. Almost word-for-word in both, he observes that the closer to the Mediterranean he travelled, he could "observe an increase of black hair, black eyes, full lips and dark complexions. He will observe a Southern and Eastern style of dress." The painting at the top of my set here shows a dark skinned woman and the head wraps similar to those of African and African descended women who covered their hair during the work week.

He continued to find more "evidences of a common identity with the African," such as women carrying bundles on their heads (actually a much easier way to carry a rather heavy and large load. Try it with your laundry or a box of books, if you haven't), working fields in common while living in villages rather than on individual farms. How can this work be degrading, how can it be a sign of inferiority, he seems to be asking, if Europeans there in the cradle of western civilization engage in the very same behaviors?

Moreover, the cradle of western civilization bordered on the continent of Africa, so how could that continent and its people be excluded from the concept? But, then, that became a driving question for him as he thought about this journey and what it all meant.