Perry Downs knowing that he is a brother of yours endeavoring to inform you where I am at. I am also a son of Harriet Baileys, Grandson of Elisabeth & Isaac Bailey, Talbert Co. Maryland, Lees Mill Hill near Hillsborough & to show you farther we all used to belong to R. & A. Emteney who was a clerk for Col Lloyd. I want to see a letter which you wrote to sister Alice since that John P. Emteney has sold my wife and for that reason I am in that State. I have found my wife and am still living with her. I am doing pretty well here and get treated pretty well also & I am getting $15.00 gold wages a month.

I have a great desire to see you if it is possible to make arrangements to bring me to you. I am 55 years of age now. Do you recollect the time I brought uncle harry Dons which was the last time I seen you.

Perry Downs was Frederick Douglass's older brother by four years. Douglass did remember Downs, and mentioned him twice in his autobiographies, first as one of the stranger siblings he encountered when his grandmother dropped him at Wye House, and, second, just before the division of the Anthony estate when Andrew Anthony kicked the living daylights out of Downs.

Downs dictated this letter to someone, as you can see by the phonetic spellings and the way that the syntax runs in a stream with little punctuation. The writer, for instance, rendered "Anthony" as "Emteny," suggesting Downs' pronunciation.

Downs verified his identity by recounting specific information that demonstrated a shared history. Anyone who read Douglass's autobiographies knew some of these details, but an unlettered, rural, former slave like Downs probably did not know that his brother had two autobiographies published.

I actually have not done enough research on the specifics of this letter. I'm not sure of Downs's fate after his valuation in 1826. He mentions John P. Anthony, who was the son of Andrew Anthony, suggesting that Andrew must have inherited Perry, who then became the property of John when Andrew died. Yet, he doesn't say that John was his own master, just his wife's. I don't know the identity of Downs's wife. "Sister Alice" could mean "sister Eliza" or a fictive "sister." ("Fictive" not meaning "imaginary" but one of their peers in their community.) Either way, she was someone they both had known. "Uncle Harry" we have seen in the inventory, the possible brother of their grandmother Betsey, who became the property of Richard Anthony. If they last saw one another in connection with Harry, then their last meeting took place in late 1826 or early 1827, forty years earlier.

By the way, I originally thought that "Millecan" was also a phonetic spelling. So I used the trusty Google maps to see if anything similar appeared in the county. Take a look: 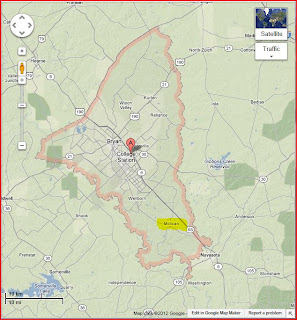 The answers to some of the questions might lie in the court records of Brazos County, Texas. I would suggest that as a research paper to a student if I still taught in east Texas.

By the way, Texas has a town called "Paris," up toward Dallas. You may have seen the movie. Maybe not (I haven't). Anyway, that bit of information is apropos of nothing except that, at the time you read this post, this Douglass scholar will be in the other Paris. You know. The one in France. Rest assured, I will be looking for Ottilie Assing's grave, the Bois de Boulogne where she committed suicide, and the location of the Paris morgue, which was located conveniently next to Notre Dame. Postings to follow, if there is anything to see -- and evenif there is not.