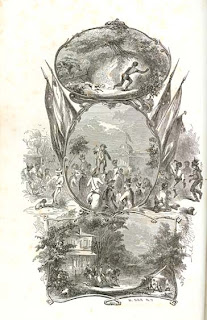 In spring 1826, Frederick sailed to Baltimore to live with Hugh and Sophia Auld as a babysitter or nanny to their two-year-old son Thomas. In the fall, Aaron Anthony, Lucretia's father and Frederick's master, died at Lucretia and Thomas Auld’s home in Hillsboro, Talbot County, not too far from where Douglass had lived as a very small child.

Between Anthony’s death in November and the inventory of his estate in December, Frederick returned to Talbot County for appraisal as part of Anthony’s estate. The list showing the valuation of Frederick and his family, the people owned by Anthony, bears the date 26 December 1826. The list demonstrating the division of the people to the three heirs bears the date 27 Sept 1827. In July 1827, Lucretia died.

In his accounts, Douglass wrote that he learned of Lucretia’s death only after he returned to Baltimore. His most recent biographers express perplexity as to the reason he would not have known of her death, since, they presume, he would have been there in the county at the time. William McFeely posits that no one told Frederick about Lucretia's death until later, clearly assuming that Frederick did not see her at all during his time back in the country. All appear to believe that Douglass arrived in Talbot County shortly before the valuation document was created and left after the division document was drawn up.

Douglass himself did not clearly depict what happened during this process. He told of returning to Talbot County. He explained the valuation and, on the heels of that explanation, told of his family’s fears of the division. In reading his autobiographies, an audience could imagine that all of the slaves were, as William McFeely described in Frederick Douglass, gathered in one place on one day, lined up, appraised like livestock, and then separated into various groups and led off to their new masters.

The dates of the documents, however, suggest that both took place at vastly different times, nearly a year apart. Douglass revealed very little about what actually happened at the valuation and division. For instance, although he worried about his grandmother’s fate, he wrote nothing of seeing her. The only relative he specifically noted as encountering was his older brother Perry. He also said nothing specifically of meeting his potential masters or mistress, with the exception of Andrew Anthony, whom he described as beating and kicking Perry in the head then threatening to do the same to Frederick.* The autobiographies served as abolitionist propaganda, meant to describe the violence done to slave bodies, families, and communities, so his description of this episode steps away from the strictly personal to describe a process in general. So, his depiction eliminated the intimacy of his experience in order to focus upon the reduction of humans to property and the violation of kinship ties as a result.

What actually happened, then? My hypothesis is this. Anthony died and his executors called all of his slave property to Talbot County for appraisal. Most of Frederick’s kin seems to have lived within the county on Anthony’s farms or hired out, so the appraisers could go to see them easily and estimate their price on the slave market. Baltimore was probably too far, so they called him back. Once the estate managers had fixed his dollar value -- $110 in 1826, or $2092.15 in 2010 – they had no reason to keep him about since the division itself would first take place on paper and the new masters would decide where to move their new property, if they so chose.

Furthermore, if any cash changed hands for Frederick’s services in Baltimore, he seems to have been oblivious to the transaction; but, if his work brought his master an income, then whether or not he became the property of Thomas Auld or one of Lucretia’s brothers, any time he spent away from Baltimore or not working in some capacity was lost income for the estate. If he was not earning his master an income, he at least was not eating his master’s food or costing his master anything for his upkeep, all of which fell to Hugh Auld, as far as seems reasonable. Therefore, keeping Frederick in the country, doing nothing in particular that he mentioned, was not a prudent financial decision.

More likely, Frederick arrived in Talbot County, was appraised, and then was sent back, all lasting a total of a few weeks – which he stated was the length of the duration of his trip. Even if the trip lasted as long as the six months that he said it felt, he would have returned in May or June, before Lucretia’s death in July. Thus, he actually did only learn of her death after the fact.

-------------------------
*Perry, incidentally, was probably inherited by Andrew since he was later inherited by Andrew’s son, Joseph. When I checked on this bit of information for this post, I realized that Perry did not appear on the division list, nor did one or two other men listed in the valuation list. Now, I have some questions for those documents, and will have to analyze them a bit more rigorously. On first glance, they seem to include only the women, older men, and children; but I may be wrong. In any case, why isn't Perry on that list?

Image: Illustration from My Bondage and My Freedom (1855): http://docsouth.unc.edu/neh/douglass55/ill1.html
Posted by Leigh Fought at 3:00 AM