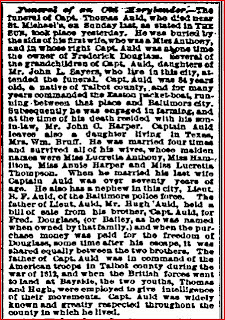 Funeral of an Old Marylander -- The funeral of Capt. Thomas Auld, who died near St. Michael's on Sunday last, as stated in t THE SUN, took place yesterday. he was buried by the side of his first wife, who was a Miss Anthony, and in whose right Capt. Auld was some time the owner of Frederick Douglass. Several of the grandchildren of Capt. Auld, daughters of Mr. John L. Sayers, who live in this city, attended the funeral. Capt. Auld was 84 years old, a native of Talbot county, and for many years commanded the Easton packet-boat, running between that place and Baltimore city.. Subsequently he was engaged in farming, and at the time of his death resided with his son-in-law, Mr. John C. Harper. Captain Auld leaves also a daughter living in Texas, Mrs. Wm. Bruff. He was married four times and survived all of his wives, whose maiden names were Miss Lucretia Anthony, Miss Hamilton, Miss Annie Harper and Miss Lucretia Thompson. When he married his last wife Captain Auld was over seventy years of age. He also has a nephew in this city, Lieut. B.F. Auld, of the Baltimore police force. The father of Lieut. Auld, Mr. Hugh Auld, held a bill of sale from his brother, Capt. Auld, for Fred. Douglass, (or Bailey, as he was named when owned by that family,) and when the purchase money was paid for the freedom of Douglass, some time after his escape, it was sheared equally between the two brothers. The father of Capt. Auld was in command of the American troops in Talbot county during the war of 1812, and when the British forces went to land at Bayside, the two youths, Thomas and Hugh, were employed to give intelligence of their movements. Capt. Auld was widely known and greatly respected throughout the county in which he lived.

Thomas Auld may be one of the few former slaveholders whose obituary named one of his former slaves and indicates that he, the owner, was renowned for owning that particular slave.

In 1826, Lucretia Auld inherited part of the extended Bailey family upon the death of her father, Aaron Anthony. The part of the family included Frederick, his older sister Eliza, his aunts Milly and Hester, several cousins, and a baby who was probably his youngest sister, Harriet, only about a year old. Their value totaled $935.00 -- that's $17,783.30 in 2010 dollar amounts. Lucretia died in July 1827. Her husband, Thomas Auld, inherited her property and thereby became the master. In 1828, he married Rowena Hambleton -- not "Hamilton." Both Lucretia and Rowena appeared in his autobiographies, one very favorably and one less so.

Lieutenant B.F. Auld was Benjamin Franklin Auld, son of Hugh and Sophia Auld. He did not appear in Douglass's autobiographies but was born in 1828, during the time that Douglass lived in the Auld household in Baltimore. He and Douglass corresponded in later decades, Douglass asking him for details of the Aulds' fates and of his own childhood.

Mr. John L. Sears -- not "Sayers" -- married Arianna Amanda Auld, daughter of Lucretia and Thomas Auld. Douglass visited Arianna Sears in 1859 when she lived in Philadelphia, just before he learned of the failure of John Brown's raid at Harpers Ferry, which forced him to leave a bit early and much more clandestinely than planned for an English tour. He also visited her again on her deathbed. Neither seemed to have cared for Rowena Auld, who died in the 1840s.

Mrs. William Bruff, as far as I can tell, was Louisa Auld Bruff, the daughter of Thomas and Rowena. In the 1880s, she offered to sell her St. Michael's home to Douglass for a somewhat inflated price. He seems to have declined the offer. Instead, he later bought a summer home in the black middle class community, Highland Beach.

The father of Hugh and Thomas -- and Arian, Edward, Zepporah, Willison, Washington, Sarah and Haddaway -- was Hugh Auld, Sr. He was in the militia in Talbot County during the War of 1812. He also appears to have owned slaves for a period of time in the first decade of the 1800s, but did not keep them. Dickson Preston says that he freed them, but gave no source for that information.  He also says that the land owned by the Auld, Sr., was sold by him to Thomas Kemp (no relation to my grandfather, as far as I know, whose ancestors were in southern Mississippi at the time), but the documents that he cites near that statement say that the property was sold at a Sheriff's Sale on the order of Auld's creditors.  The Aulds with which I am concerned, both Hughs and Thomas, as well as an Edward (probably the brother of the older Hugh), were all involved in maritime trade on the Chesapeake -- the packets from Baltimore to Talbot County -- and in shipbuilding.

I've been trying to piece all of this together in the past week because there is more to Lucretia, Sophia, and Rowena Auld than Douglass himself let on or his biographers have investigated. 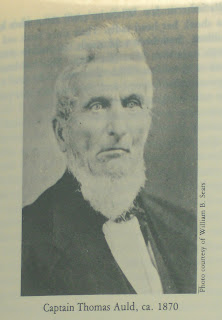