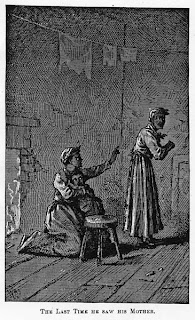 Douglass treated Lucretia Auld very well in his autobiographies. When a cousin wounded him in the forehead, leaving the permanent scar above the bridge of his nose that added to the intensity of his gaze in photographs, Lucretia bound him up. When he grew hungry, he discovered that, if he sang under her window, she would give him bread. She gave him his first pair of pants for his trip to Baltimore to stay with her in-laws, Hugh and Sophia Auld. He contrasted Lucretia with Aunt Katy, the cook in the kitchen, who was his grandmother's niece. Katy, roughly his own mothers age (and mistakenly referred to as "Katy Emblem" in some secondary sources), he described as starving and otherwise abusing him.

Some historians have overblown Lucretia's kindness by misunderstanding Douglass's account. They portray Lucretia as interceding for little Frederick. Yet, Frederick never specifically said that she did that. She just bound his bleeding head once, and gave him bread when he entertained her. Sending him to Baltimore had little to do with saving him from Katy or anyone else.

Historians also make much of his alleged special treatment at her hands, but they fail to take into account that he described his own experiences without the context of the other children around him. They attribute this alleged special treatment to their alleged kinship as half-siblings and to Frederick's supposed obvious exceptionalism. No evidence exists to suggest that the kinship would have made her treat him specially, especially if she did not treat his siblings -- who would also have been her half-siblings -- with the same consideration. In fact, he himself suggested that kinship might mean worse treatment when he told the tale of the planter Edward Lloyd's enslaved son whose white brother send him to the auction block. The exceptionalism too comes from Douglass's portrayal of himself in isolation and from biographers' tendency to see backward in time, attempting to pinpoint brilliance at an early age in order to explain the genius as an adult.

Frederick's "special" treatment may simply have been a result of being in the right place at the right time. Sure, he was smart in figuring out a way to manipulate Lucretia to feed him, but she probably just thought he was cute and amusing. When her sister-in-law, expecting a new baby, wanted a young boy to keep watch on her two-year-old son, Lucretia looked out her window and saw an older boy, who had a little cultivation through his association with David Lloyd (another white son of the planter Edward Lloyd), could entertain, and was approaching the age in which he would be sent somewhere for some purpose. Why not send him? Frederick's cousin Henny was probably sent to Baltimore a few years later for the same purpose. Her story did not end so well, but that is for another time.

Meanwhile, Lucretia, from her mother's death, oversaw the home in which both Frederick and Aunt Katy lived. Katy seemed to have had charge of the children sent to live in the kitchen, all between the ages of six and nine, but Lucretia was in charge of Katy. That would mean that the rations given to Katy to feed the children came from Lucretia. Lucretia, as mistress of the house, had the power to intercede and ensure that the children were fed more, if she so chose. She did not.