It is my painful duty to inform you of the death of our dear friend, Miss Ottilia Assing. She died in Paris on the 21st of August being about to start on a journey to Spain. I have reason to believe that Miss Assing took poison (which she always carried wither) in the Bois de Boulogne where she fell suddenly dead to the ground. The body was taken to the morgue, where it remained sometime for identification. A fortnight after I was notified of it and have taken care that she was suitably buried in the cemetery de la morgue a’ lory. Had I not been timely informed the body would have been delivered to the medical students for dissection.

Miss Assing was suffering from a cancer in the breast and it is supposed that being convinced of the incurableness of the disease she committed suicide in a moment of despondency.

She had in the Post Office Savings Bank here 3000 francs bequeathed to the servants of her defunct sister. I was made executor of the will and have taken steps accordingly. So far I have not succeeded in obtaining possession of her papers and effects she had with her in Paris. Most of these according to the report of the American Consul, Mr. George Walker, appear to have been lost and those left here cosist (?) (consist) of a few trifling ornaments not worth sending to New York. Besides the exportation from Italy of articles “used” is at present prohibited on account of the cholera.

I have received from the American Consul Mr. George Walker, the sum of 1260 francs in cash which Miss Assing had with her. This amount, however, was not sufficient to pay all expenses.

I would, therefore request (1) that the funeral charges (331 francs 50 c) be refunded to me; (2) that provisions be made for placing a plain cross slate, in memory of Miss Assing, on her grave in the cemetery (?) (cemetery) de la Morgue a’ lory pres Paris. (See French receipt)

As agents I can recommend to you Messrs Curtin & Rivoire H rue Beaurepaire in Paris who will furnish the funeral certificate necessary for the opening of the (extrait mortuaire) will you have in hand.

I should not have delayed informing you, dear sir, of the death of our beloved friend had I not hoped to received more papers, documents, valuables etc. from Paris. This hope having vanished I will no longer defer to officially convey to you the mournful intelligence.

I have the honor to be, dear sir,
Your most obedient servant
Rinaldo Kuntzel

If you search for Ottilie or Ottilia Assing in Google, you would think that she killed herself because Frederick Douglass had broken her heart by marrying Helen Pitts, another white woman, twenty years their junior. Online sources say this because her biographer, Maria Diedrich, painted a tragically romantic portrait of her despite evidence to the contrary. All sources, which Diedrich cites, say that Assing had been diagnosed with breast cancer.

Despite the 21st century image of breast cancer being pink ribbons and survival narratives, the disease is still dreadful and deadly today, even with treatments. Indeed, treatment is still heroic, involving surgery and essentially poisoning the woman just enough to eliminate the cancer without killing the woman. This is progress. In the nineteenth century, radical mastectomy was the only treatment; and, in an age without mammograms or other early detection technologies, by the time surgery took place, the cancer was already in the lymph nodes, coursing throughout her body. If you are curious about how this disease corroded a woman's body, search in Google Images. You would understand the horror. Suicide was a your own merciful exit, even when you had a family, doctors and wealth to take you through the longer death.

This is a late nineteenth century depicting of a mastectomy procedure.: 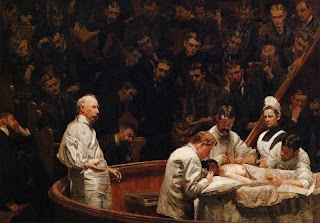 Assing had no family when she learned of this diagnosis. Sure, she had friends, but they had families or were elderly, none equipped to take on the last months or years of a dying woman's life. Douglass himself was out of the question because he was a man. Men did not do that. Women did, and she did not know the new Mrs. Douglass. This ordeal she faced, she faced alone; and, even had she not been alone, she still faced the ordeal. Suicide allowed her control and dignity in her dying.

This is the Bois de Boulonge, the green strip just below the horizon, as seen from the Arc de Triomphe.: 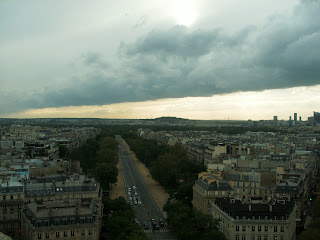 I anticipated a cultivated park, much like Central Park in New York City; but, really, it is a Bois -- a forest. At least, the part into which I wandered was very wooded, silent but for the distant hum of traffic.: 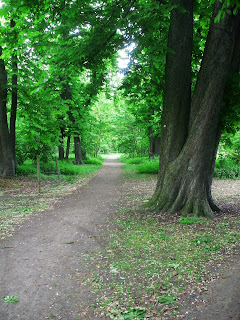 I have no idea where she died in the park. As  you can see from the map, it sprawls over a large space.: 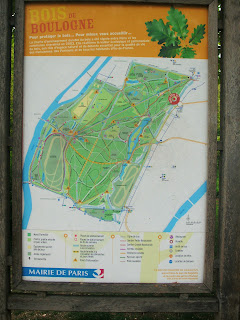 Park benches were difficult to find, as well. Not that I could say, "here. Here is where she passed her last moments." I just wanted to imagine what she did, where she did it, and what she faced, in order to understand her with more sympathy and accuracy than I have read. 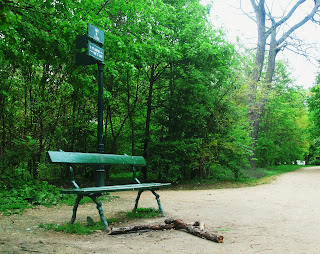 The police gathered her body, unidentified, and took her to the city morgue to lie with the victims of murderers, the indigent who passed away unnoticed and unnamed, and the bloated bodies fished out of the Seine. At the time, the Paris morgue displayed the bodies, unclothed, but with their private parts covered, for people to identify the unknown dead. The procedure became a draw for tourists (Victorians were such ghouls -- says the woman who visits cemeteries on vacation) and the newer morgue building had a design that served that purpose better. It sat on the Ile de Cite, behind Notre Dame and not far from the Prefecture of Police. You can see its location in this image, taken from the Bell Tower of Notre Dame (no, I saw no hunchbacks), down by the point at the end of the bridge, about where the greyish white building stands.: 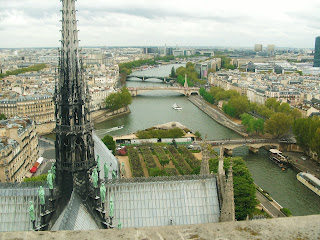 The site is now part of the memorial for the Jewish deportees from Paris. Assing, incidentally, was also part Jewish, but professed atheism. Perhaps she would have found this use of the space fitting, and would not have minded so much her body being slated for scientific research. Or not.: 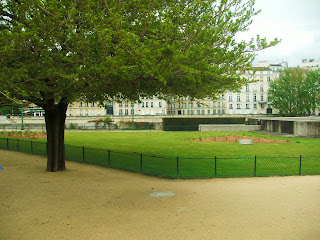 I don't know where she is buried. I can find no record of a cemetery on the verge or on the edge of town or for the morgue. I don't even know if Douglass visited her grave. His diary for his journey doesn't include Paris.

So, I leave her here, with this view of her last identified resting place, the site of the morgue and the deportee memorial at night from a boat on the Seine: 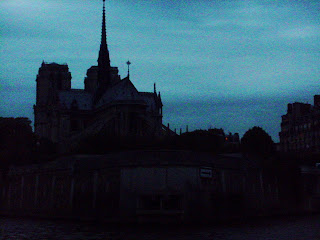