Quibbling With Details: Helen Pitts Seems Not To Have Worked at Hampton 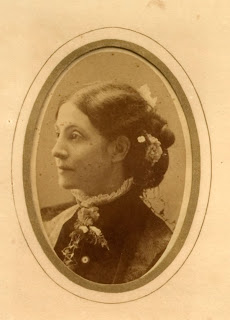 Helen Pitts had a career long before she took advantage of the patronage system and went to work for her uncle's neighbor in the Recorder of Deeds office. Like many genteel and educated young ladies, both black and white, she became a teacher. The advent of the Civil War allowed her to put both her education and her reform impulse to work by joining the American Missionary Association in educating newly freed African Americans in the south.

All primary sources -- that is, the AMA records and her alumna file at Mt. Holyoke College -- say that she went to Norfolk, Virginia, in 1863 and remained there until 1864. Disease ran rampant, and she fell to typhoid or some similar infection. She convalesced through the following year back at her home in Honeoye, New York, south of Rochester.

If you look in Douglass's biographies, you find very little written about her until the past 20 years. In the more recent books, you find her mentioned, but, outside of a quite good and well-documented 1995 Shippensburg dissertation by Julie R. Nelson, most Douglass biographers have expressed little curiosity about her as a living person and an actor in Douglass's life. (This was one of the factors that led me to conceive of this book in the first place.) Lack of curiosity often leads to the repetition of unverified information, and I came across this in piecing together Pitts's life.

As an aside to the uninitiated: historians will look at secondary sources -- books written by other historians -- in order to see what those other historians say about a subject, to gain some insight into the subject, and to find clues pointing toward primary sources -- contemporary records documenting the events in question. As a rule, it is best to cite the secondary sources in matters of interpretation and only the primary sources for points of fact. Otherwise, you must place trust in someone else's reading of those primary documents and that is not always the wisest thing to do. This is a case in point.

William McFeely, in his well-written but weakly-researched biography Frederick Douglass, wrote, "In the 1860s, following the Civil War, Helen Pitts taught at Hampton Institute, later Booker T. Washington's alma mater. Ill-health, perhaps coupled with discouragement, sent her back to Honeoye, where she remained for several years." [p. 310] Maria Diedrich, in her extremely flawed Love Across Color Lines, wrote, "She was a well-educated woman who had graduated from Mount Holyoke Seminary in 1857 and had taught at Hampton Institute." (Actually, Pitts began in 1857 and graduated in 1859 -- but that's not the detail about which I am quibbling right now.) Diedrich cites MeFeely for that information, as does about every website mentioning Pitts, and McFeely has no source. That alone should be cause for consternation.

Hampton Institute was formed by the American Missionary Association, for whom Pitts did work as a teacher; but the Institute did not open until 1868, four years after she left Virginia. I don't have clear documentation for Helen's whereabouts between 1866 and her arrival in Washington, D.C., a decade later, so I wondered if this were true. McFeely's narrative resembles that of her experience in Norfolk, and he fails to mention Norfolk at all, so maybe he got his sources mixed up, or maybe he thought that, because she worked for the AMA and the AMA opened Hampton, then she must have taught at Hampton (hence his avoidance of specific dates). Maybe she worked in Norfolk, but after she recovered and after the war, she went back into the classroom, this time at Hampton. That could be an interesting layer to the story, and certainly Hampton might like that connection, as well.

So, I contacted Hampton University's archives. They responded with great efficiency. Not only did the school not open until after the period in which Pitts taught for the AMA, but the school has no record of her attending or teaching at the school. So, no connection with Hampton.

Still, her story will be fascinating to write because, aside from Nelson, Pitts only appears in conjunction with the death of Anna Douglass, the suicide of Ottilie Assing (the fallacy of the last is for another post), and the controversy that her interracial marriage caused. Like I said, no one but Nelson has attempted to understand her and she held a complicated place in Douglass's life, both while he was living and in commemorating him after he had died.